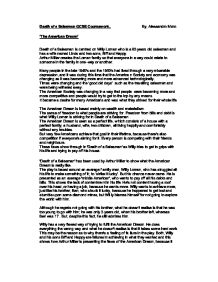 'The American Dream' - Death of a Salesman.

Death of a Salesman GCSE Coursework, By, Alessandro Moro 'The American Dream' Death of a Salesman is centred on Willy Loman who is a 63 years old salesman and has a wife named Linda and two sons, Biff and Happy. Arthur Miller creates the Loman family so that everyone in a way could relate to someone in the family in one-way or another. Many people in the late 1940's and the 1950's had lived through a very miserable depression, and it was during this time that the American Society and economy was changing as it was becoming more and more advanced technologically. Times were changing and the 'good old days' such as the travelling salesman and were being withered away. The American Society was changing in a way that people were becoming more and more competitive and people would try to get to the top by any means. It became a desire for many Americans and was what they strived for their whole life. The American Dream is based mainly on wealth and materialism. The sense of freedom is what people are striving for. ...read more.

Willy grew up believing that being "well-liked" is the secret to becoming a success. He thinks that popularity will help you charm teachers and even open doors in business. In some ways this may be true however, one should also have real skills. Miller shows multiple points in the story where Willy speaks of the importance of being well liked and of the importance of appearances. Willy says, "I thank the almighty God you're both built like Adonises" to his sons. There are many other examples of this, when he is blinded by his narrow-minded views. For instance: he taunts at the 'nerdy' Bernard, who is too focused on his academic success to be popular. In a flashback Willy has a conversation with Biff: "Bernard is not well-liked, is he?... Bernard can get the best marks in school, y'understand, but when he gets out into the business world, you are going to be five times ahead of him" But it all came crashing down soon afterwards, when he failed math. Biff never studied, or thought about the value of grades. He valued what his father instructed him to. ...read more.

And he didn't even mention it!' Willy says. This shows that Bernard isn't the type to boast about how well he's doing even though he climbing the ladder towards the American Dream. He's overtaken Biff and Willy regrets that, but isn't quite sure who to blame. Himself or Biff? Willy is blinded by false hope and great aspirations of striking it rich, but he's doing all this for his children, so that they don't have to struggle the way he did. But Bernard and Charley show that people have to do things themselves to achieve what they want to achieve, because Bernard is a top lawyer and he did this without anyone's help. He doesn't need Charley to provide for him, nor is he working for him either. The only things that Willy has ever been able to achieve in his life are solid material goods, such as his house, fridge, car and vacuum cleaner. But he doesn't think that it's enough, so he decides to go and crash the car and kill himself, just because he wants his children to lead a comfortable life. His death brings in money for his children, but it shows what lengths Willy went to just so that his children could lead the perfect life of this American Dream. ...read more.