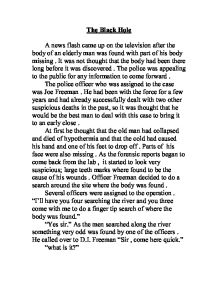 The Black Hole A news flash came up on the television after the body of an elderly man was found with part of his body missing . It was not thought that the body had been there long before it was discovered . The police was appealing to the public for any information to come forward . The police officer who was assigned to the case was Joe Freeman . He had been with the force for a few years and had already successfully dealt with two other suspicious deaths in the past, so it was thought that he would be the best man to deal with this case to bring it to an early close . At first he thought that the old man had collapsed and died of hypothermia and that the cold had caused his hand and one of his feet to drop off . Parts of his face were also missing . As the forensic reports began to come back from the lab , it started to look very suspicious; large teeth marks where found to be the cause of his wounds . ...read more.

" Conner was on his knees throwing up . Then , there was a sound of splashing in the distance . "Quiet you lot !" demanded the Inspector . They all took cover and silently waited to see what was making the noise . To their horror , a family of rats were returning to the hole , pulling another body between them . They could not believe their eyes . Rats as big as sheep , with large teeth . They watched open mouthed as the giant rats disappeared into the hole pulling the body behind them . The inspector decided it was time to make a hasty retreat back to the station and decide what action to take next , to get rid of these vermin for good . It was decided that experts had to be called in urgently before more people were killed , but would a normal rat catcher be able to deal with these giant rats ? ...read more.

They were also visibly shaken as they emerged from the hole . Before anyone had chance to speak, one of the giant rats appeared from nowhere and pounced on one of the rat catchers . "oh my God !" he yelled, as the rat tore off part of his ear . Blood was streaming down his neck as he tried to escape . The rat then latched onto his legs , as he tried to run away , but it just tore a chunk from his calf . "help me , for God sake , somebody help me !" he screamed . Then the other rats appeared and all hell let loose . The armed squad jumped into action , and lit up the darkness with gunfire......followed by silence , except for the moans from the injured rat catcher , and sirens in the distance from the other emergency teams . The police helicopter hovered above beaming down a powerful spotlight which lit up the river , exposing the carnage . Dead rats lying like massive rocks in the water. Finally they were all dead.........or were they? ...read more.