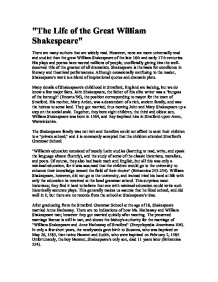 "The Life of the Great William Shakespeare" There are many authors that are widely read. However, none are more universally read and studied than the great William Shakespeare of the late 16th and early 17th centuries. His plays and poems have moved millions of people, unofficially giving him the well-deserved title of the greatest of all dramatists. Shakespeare is the basis for excellence in literacy and theatrical performances. Although occasionally confusing to the reader, Shakespeare's work is a blend of inspirational quotes and dramatic plots. Many details of Shakespeare's childhood in Stratford, England are lacking, but we do know a few major facts. John Shakespeare, the father of this elite writer was a "burgess of the borough" (Encarta '96), the position corresponding to mayor for the town of Stratford. His mother, Mary Arden, was a descendant of a rich, ancient family, and was the heiress to some land. They got married, thus moving John and Mary Shakespeare up a step on the social scale. Together, they bore eight children, the third and oldest son, William Shakespeare was born in 1564, and they baptized him in Stratford-upon-Avon, Warwickshire. The Shakespeare family was not rich and therefore could not afford to send their children to a "private school," and it is commonly accepted that the children attended Stratford's Grammar School. ...read more.

These are known for their bloody detail and horrendous language, such that also appears in Titus Andronicus (1594). His comedies from this period include: The Comedy of Errors (1592), The Taming Of The Shrew (1593), The Two Gentlemen Of Verona (1594), and Love's Labour's Lost (1594). Shakespeare's second period shows his more important plays which were concerned with history, comedy, and tragedy. During this period, his style and approach became more mature and individualized. The historical plays include Richard II (1595), Henry IV, Parts I, II (1597), and Henry V (1598), all of which show excellent examples of Shakespeare's new, mature writing style. The outstanding comedies, which include the best of all the periods are: A Midsummer Night's Dream (1595), The Merchant of Venice (1596), Much Ado About Nothing (1599), As You Like It (1599), The Twelfth Night (1600), and The Merry Wives of Windsor (1599). His two most famous tragedies, Romeo and Juliet (1595) and Julias Caesar (1599), are also included in this period. This period began to show quotes that seemed to linger in people's minds, such as the quote from A Midsummer Night's Dream, "The course of true love never did run smooth" (A Midsummer Night's Dream 1.1.134). The Third Period includes more of the tragedies than anything else. It seems as if after seeing the success and popularity that Romeo and Juliet and Julias Caesar brought him, he decided that more tragedies would do his reputation nothing but good. ...read more.

In A Midsummer Night's Dream, the love triangle between Hermia, Lysander, Demietrus, and Helena was confused by Puck, the fairy who struck the wrong couple with his flower. Trying to enhance the love that each of the couples already had, Puck made everything worse, and the wrong people fell in love with each other. Oberon, the king of the fairies, told Puck to undo his mess, and he did, leaving the happy couples back to the way they were before, and the beautiful weddings ended the childlike-romantic play. In Romeo and Juliet, the feuding families, the Capulets and the Montagues, did not know that there was a love brewing between Romeo and Juliet, teenagers from each side. They met with the help of Juliet's nurse, and planned to get married by tricking everyone into believing they were dead. Bringing an end to their families' history of feuding, the teens end up killing themselves in a huge misunderstanding. At times, there were confusing parts, where it was hard to understand because of the difference our language has undergone since Shakespeare's time. While reading the famous parts for the first time that are acted out over time and time again, I began to see why people regard Shakespeare as a world- renowned author and an excellent source of history. Not only does he have the war drawn male hero for the women to drool over, he has love stories that are strong and moving, even for the manliest of men. ...read more.