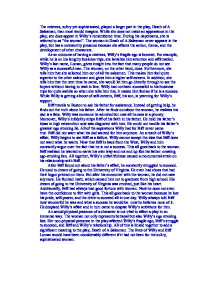 The mistress, sultry yet sophisticated, played a larger part in the play, Death of A Salesman, than most would imagine.

The mistress, sultry yet sophisticated, played a larger part in the play, Death of A Salesman, than most would imagine. While she does not make an appearance in the play, she does appear in Willy's remembered time. During his daydreams, she is referred to as "the woman". The woman in Death of A Salesman never appears in the play, but has a noteworthy presence because she affects the action, theme, and the development of other characters. As an outcome of having a mistress, Willy's fragile ego is boosted. For example, while he is on his lengthy business trips, she lavishes him attention and affirmation. Willy's last name, Loman, gives insight into the fact that many people do not see Willy as a successful man. ...read more.

After he finds out about the woman, he realizes his dad is a fake. Willy was someone he admired but now all he sees is a phoney. Moreover, Willy's infidelity strips Biff of his faith in his father. He held his father's ideas in high esteem but now was disgusted with him. He could not handle his father's greatest ego stroking lie. All of the aspirations Willy had for Biff never came true Biff did not want what his dad wanted for him anymore. As a result of Willy's affair, Willy begins to see Biff as a failure. Willy cannot accept the idea that Biff does not want what he wants. Now that Biff is back from the West, Willy and him constantly argue over the fact that he is not a success. ...read more.

This all goes back to the woman because he lost his pride, will power, and the drive to succeed all in one day. Willy always told Biff how wonderful he was and what a success he would be now he believes none of it. He despised Willy's affair and in turn came to despise Willy's ambitions for him. An actual physical presence of a character is not vital to affect a play in an immense way. The woman not only represents betrayal but also Willy's ego stroking lies. Her non-physical presence in the play affected Willy's fragile ego, Biff's struggle to succeed, and Biff and Willy's relationship. All of this is linked together to add a significant meaning to the play, Death of A Salesman. The lives of Willy and Biff Loman would have been considerably different if it had not been for the sultry, sophisticated woman. ...read more.