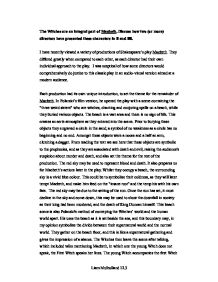 The Witches are an integral part of Macbeth. Discuss how two (or more) directors have presented these characters in Ii and Iiii.

The Witches are an integral part of Macbeth. Discuss how two (or more) directors have presented these characters in Ii and Iiii. I have recently viewed a variety of productions of Shakespeare's play Macbeth. They differed greatly when compared to each other, as each director had their own individual approach to the play. I was sceptical of how some directors would comprehensively do justice to this classic play in an audio-visual version aimed at a modern audience. Each production had its own unique introduction, to set the theme for the remainder of Macbeth. In Polanski's film version, he opened the play with a scene containing the "three weird sisters" who are witches, chanting and conjuring spells on a beach, while they buried various objects. The beach is a vast area and there is no sign of life. This creates an eerie atmosphere as they entered into the scene. Prior to burying these objects they engraved a circle in the sand; a symbol of no weakness as a circle has no beginning and no end. Amongst these objects were a noose and a half an arm, clutching a dagger. From reading the text we see here that these objects are symbolic to the prophecies, and as they are associated with death and evil, raising the audience's suspicion about murder and death, and also set the theme for the rest of the production. ...read more.

This was strange as he had the ability to do so as he had the aid of filming. A reason for this may be because Polanski wanted to add a grave sense of mystery right at the beginning of the play. The BBC 1998 version introduces us to the three 'hags' as three pre-middle-aged women reading tarot cards in act 1 scene 1. This conveys the point that they do not mould the future for Macbeth but only interpret his destiny. Although this does not stay true to the text of Shakespeare, it is modernised to the extent where I find it more believable and frightening. The Witches have no physical abnormalities except the distinction of their long, curly painted nails to symbolise that they are different. The room was in complete shadow, and the only light was provided by a single candle. Maybe this represents the last remaining 'light' deep inside Macbeth, as when the candlelight ceases the room will become saturated with darkness as will Macbeth's soul. The three witches congregated to predict and foresee future events. Each Witch has an individual symbol presented on her face. This gives a sense that each Witch had been marked for a particular form of evil. This in turn shows how they are a covenant of true evil, as they had been assigned for a special task. ...read more.

As green is used to symbolise envy, maybe this is to show Macbeths envy towards Duncan and his status of king. This focus on props and setting however prevented an in-depth look into characterisation and dialogue. Also throughout the film Polanski was un-loyal to the text as his version focused a lot on visual settings and went into grave detail with the props and scenery. This made the film attractive to watch. This attention to scenery allowed Polanski to explore and portray the different settings we read about in the text such as the witches' world. To conclude, Polanski remained loyal to the text in as far as dialogue and character development was concerned, but his advantage of film was not taken advantage of as was displayed in his poor portrayal of the witches vanishing, or not as it were. I felt that the RSC version failed to do justice to Shakespeare's play as the director's incapability to stay true to the text was clearly shown in his/her production. The BBC production was also loyal to the text as all dialogue was used and this helped the director's conveyance of character development, yet I feel that in his attempt to modernise this Shakespearean world the director detracted from the essence so the play, and falsely illustrated the settings Shakespeare attempted to portray. Due to this, the BBC version was my preferred production of the opening scenes of Macbeth. ?? ?? ?? ?? Liam Mulholland 12.3 ...read more.