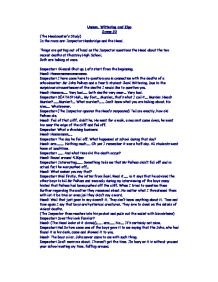 Unman, Wittering and Zigo Scene 30 (The Headmaster's Study) In the room are: Inspector Hambridge and the Head. Things are getting out of hand as the Inspector questions the Head about the two recent deaths at Chantrey High School. Both are talking at once. Inspector: Silence! Shut up. Let's start from the beginning. Head: Hmmmmmmmmmmmmm. Inspector: I have come here to question you in connection with the deaths of a schoolmaster: Mr John Pelham and a Year 5 student: Basil Wittering. Due to the suspicious circumstances of the deaths I would like to question you. Head: Hmmmm...... Very bad...... both deaths very near.... Very bad. Inspector: DEATHS? Huh... My foot.... Murder...that's what I call it.... Murder. Head: Murder?.......Murder?.... What murder?....... Don't know what you are talking about. No idea..... Whatsoever. Inspector: (The Inspector ignores the Head's responses) Tell me exactly, how did Pelham die. Head: Fell of that cliff, didn't he. He went for a walk, a sea mist came down, he went too near the edge of the cliff and fell off. Inspector: What a shocking business. Head: Hmmmmmm..... Inspector: The day he fell off. What happened at school during that day? Head: erm.......... Nothing much..... ...read more.

Inspector:...... By the way no lies. I know many things already. John: Well.... You may already know that Lower Five B claim to have pushed Mr Pelham off the cliff which has resulted in his death. Inspector: Yes...... John: They told me on my first day here. For some reason I wasn't given an assistant and I was all alone with boys I had never seen. We got a bit off track and then from one thing to another they made their confession. And like any other grown adult I didn't believe them at first... but the next day, they put Pelham's wallet in my desk. I took it to the headmaster and he practically told me to keep my nose out of things that weren't my business. So I returned to the class and then after a bit I finally realised that they had in fact killed Pelham. Inspector: How come you never showed the wallet to the police? John: I did request the Head to show it to the police but he ignored me and I personally felt that as I didn't have much evidence it was no use showing it to the police. Inspector: Interesting....... ...read more.

A close source says that the whole idea was Terhew's and therefore I will take Terhew with me to the station and question him further. I suspect that he will have to stand trial for attempted murder and if he can give me other names then they will also have to stand trial for murder. Terhew: Attempted murder? Attempted murder of whom? Head: No please don't do that. What about the reputation of my school? Inspector: You don't need to worry about the reputation of your school anymore. Why? Because it simply isn't your school anymore. Mr Winstanley will take your place for temporary until we find a suitable head. Head: What you chucking me out of. I haven't done anything wrong. Inspector: Haven't done anything wrong? Huh. You are going to have to stand trial for allegations of withholding vital evidence from the police. Head: You are joking aren't you? Inspector: And as for you John Ebony you have failed your teaching practice. With discussion with the local authority I will see if you are suitable for doing your probation year again at another school and if they say you are not fit enough of becoming a teacher then wave your chosen career bye bye. ...read more.