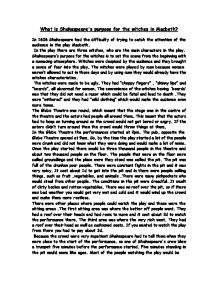 What is Shakespeare's purpose for the witches in Macbeth?

What is Shakespeare's purpose for the witches in Macbeth? In 1606 Shakespeare had the difficulty of trying to catch the attention of the audience in the play Macbeth. In the play there are three witches, who are the main characters in the play. Shakespeare's purpose for the witches is to set the scene from the beginning with a menacing atmosphere. Witches were despised by the audience and they brought a sense of fear into the play. The witches were played by men because women weren't allowed to act in those days and by using men they would already have the witches characteristics. The witches were made to be ugly. They had "choppy fingers" , "skinny lips" and "beards", all abnormal for women. The convenience of the witches having 'beards' was that they did not need a razor which could be fatal and lead to death .They were "withered" and they had "wild clothing" which would make the audience even more tense. The Globe Theatre was round, which meant that the stage was in the centre of the theatre and the actors had people all around them. ...read more.

When they came onto the stage everyone would be shocked by the state they were in. In this scene Shakespeare communicates with the audience telling them that the witches can look into the future and can cast spells, which makes the audience hate them even more. The witches come onto the stage in fog and mist and start chanting ' When shall we three meet again, in thunder lightning or in rain?'. This is connected to the thunder and lightning at the start of the scene and brings a lot of fear into the audience right from the start. Each witch had a familiar. A familiar was an evil animal or bird which spied on other people and knew what they were doing. The witches having familiars in the play made the audience even more scared of them because they believed that the witches are marked by the devil , as belonging to him by a red mark or an unusual characteristics in exchange for familiars to act as spies. The three familiars were a cat called "Gray malkin", a toad called "Paddock" and the third one is not shown which makes the audience suspicious. ...read more.

In the play witches use a number of riddles. In some of the riddles there is a use of antithesis, for example at the start of the play ' Fair is foul and foul is fair' by using antithesis they are trying to contrast the opposites. The witches also use alliteration of the letter 'f'. Also it is repeating the words 'fair' and 'foul' when Macbeth comes onto the stage and says 'So foul and fair a day I have not seen'. In some of the witches rhymes they speak in rhyming couplets, this means that there are two lines that rhyme together. For example "When shall we three meet again, in thunder lighting or in rain" The rest of the cast speak in blank verse, this is so that the witches stand out speaking in rhyme. Blank verse has 10 syllables to a line and it has no rhyme. Shakespeare's purpose for the witches in Macbeth is to create a sense of fear and evil to draw attention away from Macbeth's actions. For example, when Duncan is dead, Macbeth is upset by his actions and tries to wash away his guilt "out damn spot" as he washes his blood from his hands. The witches bear the brunt of the audiences anger for Duncan's' murder. ...read more.