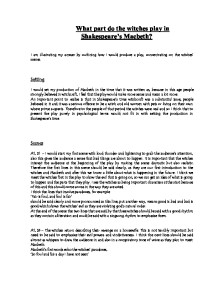 What part do the witches play in Shakespeare's Macbeth?

What part do the witches play in Shakespeare's Macbeth? I am illustrating my answer by outlining how I would produce a play, concentrating on the witches' scenes. Setting I would set my production of Macbeth in the time that it was written as, because in this age people strongly believed in witchcraft, I feel that the play would make more sense and mean a lot more. An important point to realise is that in Shakespeare's time witchcraft was a substantial issue, people believed in it and it was a serious offence to be a witch and old women with pets or living on their own where prime suspects. Therefore to the people of that period the witches were real and so I think that to present the play purely in psychological terms would not fit in with setting the production in Shakespeare's time. Scenes A1, S1 - I would start my first scene with loud thunder and lightening to grab the audience's attention, also this gives the audience a sense that bad things are about to happen. It is important that the witches interest the audience at the beginning of the play by making the scene dramatic but also realistic. ...read more.

A3, S5 - I would not include this scene in my play. I don't think it is necessary to the plot and it does not fit in very well with the rest of the play, as it is not written in blank verse. A4, S1 - All the ingredients going into the cauldron are again there to enhance the witches' evil but I don't see this as extremely important so does not need to be terribly dramatic. While the ingredients are going in I think the witches would be moving around the cauldron with excited voices, laughing in no particular sequence and with jagged movements as flowing movements would not suit their personalities. The fact that they seem to be having fun enhances the fact that they are evil as what they are doing is bad but they are having a good time and laughing about it. The list of ingredients that are being put into the cauldron should be said quite clearly however as the horrible things that are being put in again enhance the evilness. I would set the witches to make their movements take up all the space on the stage as this would keep the audience's attention and I think the whole scene would suddenly become more dramatic. ...read more.

However, although their information tempts Macbeth they do not instruct or even suggest him to carry out any of his actions. So even though they symbolise evil it is clear that man is free to resist them but Macbeth becomes dependent on their information. I also feel that the witches should dominate the stage when they are on it to emphasize the fact that they have a large influence on Macbeth and I think that it could also add to the drama. Language I think that the majority of the lines spoken by the witches and Macbeth are important, as the witches are putting forward their prophecies and it is up to Macbeth to interpret them, as he will. The verse couplets that are used in the witches' conversations should be emphasized, as they are entirely appropriate, as they suggest the world of spells and incantations. Atmosphere I would create the right atmosphere by using appropriate lighting, for example using dull, grey and blue lights to create the sense of coldness in the mood. Also this sort of lighting assists the feeling of unease and bad events, as bright lights would create a sense of well being. I would also use special effects, for example projections to show the apparitions, and fog to aid the witches and the eerie atmosphere. ...read more.