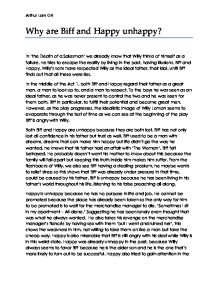 Why are Biff and Happy unhappy?

Why are Biff and Happy unhappy? In 'the Death of a Salesman' we already know that Willy thinks of himself as a failure. He tries to escape the reality by living in the past, having illusions. Biff and Happy, Willy's sons have respected Willy as the ideal father, their idol, until Biff finds out that all these were lies. In the middle of the Act 1, both Biff and Happy regard their father as a great man, a man to look up to, and a man to respect. To the boys he was seen as an ideal father, as he was never present to control the two and he was keen for them both, Biff in particular, to fulfill their potential and become great men. ...read more.

He probably doesn't want his mother to know about this because the family will fall apart but keeping this truth inside him makes him suffer. From the flashbacks of Willy, we also see Biff having a stealing problem, he maybe wants to relief stress so this shows that Biff was already under pressure in that time, could be caused by his father. Biff is unhappy because he has been living in his father's world throughout his life, listening to his false preaching all along. Happy is unhappy because he has no purpose in life and job. He cannot be promoted because the place has already been taken so the only way for him to be promoted is to wait for the merchandise manager to die. ...read more.

Happy was already unhappy in the past, because Willy always seems to favor Biff because he is the older son and he is the one that's more likely to turn out to be successful. Happy also tried to gain attention in the past by saying 'I'm losing weight'. Willy might have told his sons not to be fat because he doesn't want them to be called a 'walrus' like he did. The Loman brothers are unhappy because their father - Willy is in a bad state; he even tried to kill himself. They both look at themselves as failures, not being successful enough. And Biff knows about the affair and Happy wants to be promoted, be more successful, to tell his father he was wrong to favor Biff. Arthur Lam English ?? ?? ?? ?? Arthur Lam GR ...read more.