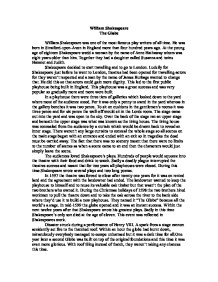 William Shakespeare The Globe William Shakespeare was one of the most famous play writers of all time. He was born in Stratford-upon-Avon in England more than four hundred years ago. At the young age of eighteen Shakespeare wedd a woman by the name of Anne Hathaway whom was eight years older than him. Together they had a daughter called Susanna and twins Hamnet and Judith. Shakespeare decided to start travelling and to go to London. Luckily for Shakespeare just before he went to London, theatres had been opened for travelling actors for they weren't respected and a man by the name of James Burbage wanted to change that. He did this so that actors could gain more dignity. This led to the first public playhouse being built in England. This playhouse was a great success and was very popular so gradually more and more were built. ...read more.

The fact that there was no scenery meant that there were no limits to the number of scenes as when a scene came to an end then the characters would just simply leave the scene. The audiences loved Shakespeare's plays. Hundreds of people would squeeze into the theatre with their food and drink to watch. Sadly a deadly plague interrupted the theatres success and meant that for two years all playhouses were closed. During this time Shakespeare wrote several plays and two long poems. In 1597 the theatre was forced to close after twenty one years for it was on rented land and the agreement with the landowner had ended. The landowner wanted to keep the playhouse to himself and to reuse its valuable oak timber but that wasn't the plan of the two brothers who owned it. During the Christmas holidays of 1598 the two brothers hired workmen to pull the theatre down and to take the oak across the river to the bank side where they'd use it to build a new playhouse. ...read more.

But it was time for Shakespeare to rest in Stratford. Shakespeare wrote his last plays and a few years later he sadly passed away on his fifty second birthday. At his funeral one of his friends said "he was not of an age, but for all time". This quote is so true for Shakespeare still lives on as people study his work everyday for he is the greatest ever play writer. Sam Wanamaker an American who longed to visit the globe from a young age and eventually did in 1949 but was disappointed to find nothing but a forgotten plaque on a wall. Sam was shocked that there was no greater tribute to Shakespeare and his famous playhouse. Sam worked, talked, hoped and pleaded so that he could get others to help him rebuild the globe to as close as the original as possible. Finally after nearly thirty years of dedication, disappointments, high hopes Sam's globe was opened. The opening was a joyful event but there was sadness to for Sam sadly never lived to see it. Jennifer Low ...read more.