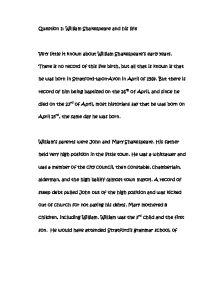 William Shakespeare and his life.

Question 1: William Shakespeare and his life Very little it known about William Shakespeare's early years. There is no record of this live birth, but all that is known is that he was born in Stratford-upon-Avon in April of 1564. But there is record of him being baptized on the 26th of April, and since he died on the 23rd of April, most historians say that he was born on April 23rd, the same day he was born. William's parents were John and Mary Shakespeare. His father held very high position in the little town. He was a whittawer and was a member of the city council, then constable, chamberlain, alderman, and the high bailiff (almost town mayor). A record of steep debt pulled John out of the high position and was kicked out of church for not paying his debts. Mary mothered 8 children, including William. William was the 3rd child and the first son. He would have attended Stratford's grammar school, of course, like all other records of the time, any documents proving his attendance have been lost. On November 28, 1582, a town bishop issued a wedding bond for William "Shagspeare" and Anne Hathaway. Anne was three months pregnant at the time of the wedding and 8 years his senior. On May 26, 1583, Susanna, their first child, was baptized. Two years later, Anne gave birth to twins, Hamnet and Judith, Hamnet wouldn't live past the age of 11. Their isn't any record known record from the birth of the twins in 1585 to 1592. But in 1592, William Shakespeare was noted on stage for his extremely brilliant acting skills. ...read more.

If I was living in the same time as Marie Antoinette, I think I'd hate her. She seemed to take the country even further in debt than it already was. I think I might have even attended her beheading, just to watch her die. She was considered a birdbrain, which I feel is true because who would have a song bird in a cage on their head? And besides, she gave blondes a bad name. How can I have any respect for a women who gives blondes a bad name? I ask you that Mr. Johnson! Question 8: Why are they important to learn about? I think it was very interesting to learn about the greatest playwright and poet of all time. He distorted the way we look at the theatre and life. He's my idol and I would love to act and write plays as well as he did. People should learn about him and keep his stories alive and kickin'. Marie Antoinette is important to learn about so we don't make the same mistakes again. I must admit, she was a wonderful person and she was smart than the king (side note: but isn't that usually for wives to be smarter than their husbands?) but she frivolously used money that wasn't even hers and wasted it one wigs. She probably had a prefect head of hair under that wig, why did she need real human hair wigs? Question 9: Compare and contrast Mr. Johnson. I've looked through many, many, MANY! different sources and could not find ONE similarity. The differences are so numerous, I'm going to skip this question and get a zero on it. ...read more.

1606. Antony And Cleopatra is believed to have been composed. 1607. Hamlet and Richard III are performed aboard the British ship Dragon off the west coast of Africa at Sierra Leone. 1607-1608. Timon of Athens, Pericles and Coriolanus are composed . 1608. The King's Men take on a twenty-one year lease of London's first permanently enclosed theatre, the Blackfriars Theatre in this year. Notes on stage directions, suggest The Tempest was penned with a performance at this theatre in mind. The return of the plague forces a closure of all playhouses and theatres from the spring of 1608 through to early 1610. 1609-1610. Cymbeline is thought to have been composed. 1610. Othello is performed at Oxford College by the King's Men during a summer tour. 1610-1611. The Winter's Tale is written. 1611. The Tempest was written. 1612-1613. The King's men perform Othello and Julius Caesar amongst others in this year. Shakespeare is thought to have written Cardenio, his only lost play during this period and with John Fletcher as a likely contributor, composes Henry VIII. 1613. The Globe Theatre burns to the ground. The Two Noble Kinsmen is penned. A 1634 entry within the Stationer's Registry confirms that both William Shakespeare and John Fletcher composed this play. 1614. The Globe Theatre reopens. 1616. William dies on April 23rd, his burial being recorded in the Stratford Holy Church Register two days later. 1619. Hamlet is performed as part of Christmas celebrations at court. 1623. Shakespeare's wife, Anne Hathaway dies, the same year, and fellow actors John Hemminges and Henry Condell gather together and publish for the first time, 36 of Shakespeare's 37 plays in a collection known as The First Folio. ...read more.