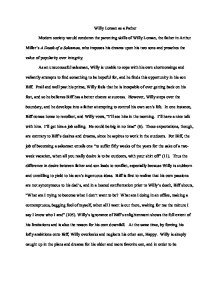 Willy Loman as a Father

Willy Loman as a Father Modern society would condemn the parenting skills of Willy Loman, the father in Arthur Miller's A Death of a Salesman, who imposes his dreams upon his two sons and preaches the value of popularity over integrity. As an unsuccessful salesman, Willy is unable to cope with his own shortcomings and valiantly attempts to find something to be hopeful for, and he finds this opportunity in his son Biff. Frail and well past his prime, Willy feels that he is incapable of ever getting back on his feet, and so he believes Biff has a better chance at success. However, Willy steps over the boundary, and he develops into a father attempting to control his own son's life. In one instance, Biff comes home to recollect, and Willy vows, "I'll see him in the morning. I'll have a nice talk with him. I'll get him a job selling. He could be big in no time" (6). These expectations, though, are contrary to Biff's desires and dreams, since he aspires to work in the outdoors. ...read more.

In today's age, seeing an older child favored over other siblings is common, but it fosters antagonism between the less favored son and his father. For example, at the restaurant, Happy refuses to recognize his father's existence, noting to the girls he has picked up around, "No, that's not my father. He's just a guy" (91). After his father's lifetime rejection of him, Happy is compelled to snub out his father from his own personal life. However, no pity should be given to Willy since he is an irresponsible father who disregards his duty to provide sound values and leadership for his sons equally. Similarly, parents today should not attempt to puppet their sons and daughters into lives as extensions of their own dreams. In almost every family, the sons will look to their father as a role model and a hero. Accordingly, fathers should use opportunities to instill qualities that will allow his sons to become responsible individuals. ...read more.

When Willy asks if Biff is meeting with Bill Oliver for lunch, Biff states that he has not made an appointment; however, Willy takes this the wrong way and screams, "you rotten little louse! Are you spiting me?" (88). His short temper and strong sense of paranoia turns any conversation he has into a flaring altercation. By being hotheaded, Willy does not show a model example for his sons; the virtues of patience and understanding disappear when Willy shows his anger vehemently. Thus any communication and emotional connections are weak between Willy and his sons, suppressing any outgrowth of compassion and understanding among them. Although the mother in a family provides a nurturing and gentle force, it is only the father who can set the standards and discipline for future progeny. Corruption of this figure can lead a household to shambles, something that Willy Loman accomplishes with his own family. By impressing his own ambitions onto his sons and preaching a skewed perspective of success, Willy would be condemned for his atrocious fathering skills in today's age. ...read more.