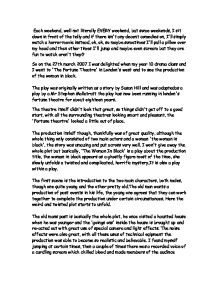 Each weekend, well not literally EVERY weekend, but some weekends, I sit down in front of the telly and if there isn't any decent comedies on, I'll simply watch a horror movie instead, ok, ok, so maybe sometimes I'll pull a pillow over my head and then other times I'll jump and maybe even scream but they are fun to watch aren't they!? So on the 27th march 2007 I was delighted when my year 10 drama class and I went to 'The Fortune Theatre' in London's west end to see the production of the woman in black. The play was originally written as a story by Susan Hill and was adaptedas a play by a Mr Stephen Mallatratt the play has now been running in london's fortune theatre for about eighteen years. The theatre itself didn't look that great, so things didn't get off to a good start, with all the surrounding theatres looking smart and pleasant, the 'Fortune theartre' looked a little out of place. The production itslelf though, thankfully was of great quality, although the whole thing only consisted of two main actors and a woman 'the woman in black', the story was amazing and put across very well. ...read more.

I found myself jumping at certain times, then a couple of times there was a recorded voice of a curdling scream which chilled blood and made members of the audince scream too. There were many other scary and freaky points to the production, none of which I will give away. The part of the old man was played by Michael Burrel who has had a long and varied career as an actor appearing in 'casualty' and 'eastenders'! the part of the actor in the play was played by Dominic Marsh who studied Drama and music at the university of Birmingham and the royal acadamy of music. The woman in black herself was played by Nathalie Bloch although in the programme she is under Vision Productions. She herself was also a main part of the play I believe that all the actors in the play were brilliant as they adapted to their characters really well considering it was a play within a play and i often got confused. The main theme in the play was revenge jenette humfrye (the woman in black) ...read more.

The wardrobe for the production was quiet small and most of the costume changes involved changing only a jacket or scarf onstage to show changes of charecter the wardrobe was onstage and it was a coatrack with coats on it. The special effects and sound i thought was the best compared to plays i have seen because no matter what the sound was coming from the back of the auditorium which made all the audience members turn around there were sounds for almost everything including talking and trains,the sound of the blood curdling scream was very real and very effective i think all the cues for sound were picked up brilliantly the sound in the production was all perfect because of Caroline Stroud. The set design was pretty basic as it was supposed to be in an old theatre but there was also some complexity to it as there was also two more parts to the stage behind gauze, representing parts of eel marsh house. To conclude my review of the 'woman in black' i will say that i have never seen a production as spine chilling and scary as this and i would definately LOVE to see it again. ...read more.