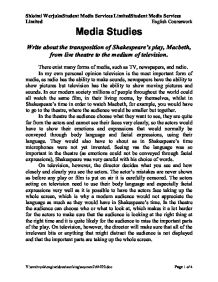 Write about the transposition of Shakespeare's play, Macbeth, from live theatre to the medium of television.

Media Studies Write about the transposition of Shakespeare's play, Macbeth, from live theatre to the medium of television. There exist many forms of media, such as TV, newspapers, and radio. In my own personal opinion television is the most important form of media, as radio has the ability to make sounds, newspapers have the ability to show pictures but television has the ability to show moving pictures and sounds. In our modern society millions of people throughout the world could all watch the same film, in their living rooms, by themselves, whilst in Shakespeare's time in order to watch Macbeth, for example, you would have to go to the theatre, where the audience would be smaller but together. In the theatre the audience choose what they want to see, they are quite far from the actors and cannot see their faces very clearly, so the actors would have to show their emotions and expressions that would normally be conveyed through body language and facial expressions, using their language. They would also have to shout as in Shakespeare's time microphones were not yet invented. Seeing vas the language was so important in the theatre (as emotions could not be conveyed through facial expressions), Shakespeare was very careful with his choice of words. ...read more.

On a Version by Anthony Sher of Macbeth it shows the actor staying still with his mouth closed yet you can hear a recording of his voice. Although this is not possible to be done in the theatre, I prefer the way it is done there, and on the Royal Shakespeare Company Production. In the 1970s they made films with violence in slow motion, showing the bullet entering the heart in slow motion. This was done because the modern audience want violence they do not find the language satisfactory. In Shakespeare's time they found the language sufficient because it was not possible to show that kind of violence in the theatre. In the scene of Banquo's ghost Shakespeare wanted there to be an actor acting as a ghost. We find this in the text, enter ghost. The Royal Shakespeare Company Production, however, decides that it is better to have an imaginary ghost instead. This was done because on television the acting is of a higher standard, as you can see the actors very clearly, so the Royal Shakespeare Company Production decided that it would be better for the audience to concentrate on Macbeth and not the ghost. The Version by Anthony Sher, however, decided to show the ghost come on. ...read more.