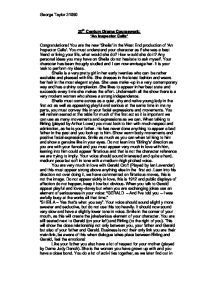 You are the new 'Sheila' in the West End production of 'An Inspector Calls'. You must understand your character as if she was a best friend or living your life, what would she do? How would she do it?

20th Century Drama Coursework: 'An Inspector Calls' Congratulations! You are the new 'Sheila' in the West End production of 'An Inspector Calls'. You must understand your character as if she was a best friend or living your life, what would she do? How would she do it? Any personal ideas you may have on Sheila do not hesitate to ask myself. Your character has been thougrly studied and I can now envisage her. It is your task to perform my ideas. Sheila is a very pretty girl in her early twenties who can be rather excitable and pleased with life. She dresses in the latest fashion and wears her hair in the most elegant styles. She uses make-up in a very contemporary way and has a shiny complexion. She likes to appear in her best state and succeeds every time she makes the effort. Underneath all the show there is a very modern woman who shows a strong independence. Sheila must come across as a quiet, shy and na�ve young lady in the first act as well as appearing playful and serious at the same time in many parts, you must convey this in your facial expressions and movements. You will remain seated at the table for much of the first act so it is important we can use as many movements and expressions as we can. ...read more.

When talking to your mother speak in an almost monotone voice, like you were being sarcastic, do not over use this, only have small hints in your voice. Talk in a faster pace then you would to your father, still having that high-pitched voice which can be sweet at times. Then there is Eric Birling (played by Andrew Lincoln), your brother. You may appear to fight sometimes, but all brothers and sisters do, I can vouch for that! It is vital that we portray you and Eric to create controversy whenever you are put in the same room together: "ERIC - If you think that's the best she can do-" "SHEILA - Don't be an ass, Eric." Eric is slightly wittier than you so you need to show a hint of jealousy with an evil eye when he 'gets one over' on you. When you speak to him whilst in-joke, speak in a sarcastic tone by sounding monotone and raising the pitch of your voice half way through and at the end of a sentence or statement. When you and Eric are being slightly more serious about things we then need to portray your and Eric's unique brother/sister bond and that you are in fact very close to each other. We will show this by direct eye conversations, by this is mean look directly into Eric's eyes when talking on a serious level, ...read more.

You feel slightly betrayed and disappointed with them. She is the same with her parents as with Gerald but less angry. You will stand into your mother as support and have a disgusted look with your father. You will move around your father a lot like you are circling him to blame him. You will become closer to Eric as he shows the same opinion as you. You are a fickle character and this is another portrayal of you being na�ve. Look interested in Eric and have an interested voice as well as formal when speaking to Eric. You mainly face in his direction and look for his approval when you make a statement about something. Only ever smile with Eric from act 2 onwards. By act 3 you have come across the most mature and grown-up of the family. You and Eric are the only ones that will face up to your responsibilities. When you have the final phone call regarding the real information you must look concerned and frightened. Face in your fathers direction when he mentions the word 'infirmary' and stay in the same position until the curtain falls. It is important you follow your character carefully and transform yourself into character when performing. Sheila is a key character and her moods and appearance often prompts other performers. Enjoy the play and I will see you on Monday for the first rehearsal. George Taylor 31090 ...read more.