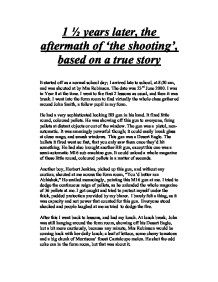 1 years later, the aftermath of 'the shooting', based on a true story.

1 1/2 years later, the aftermath of 'the shooting', based on a true story It started off as a normal school day; I arrived late to school, at 8:50 am, and was shouted at by Mrs Robinson. The date was 23rd June 2000. I was in Year 8 at the time. I went to the first 2 lessons as usual, and then it was break. I went into the form room to find virtually the whole class gathered around John Smith, a fellow pupil in my form. He had a very sophisticated looking BB gun in his hand. It fired little round, coloured pellets. He was showing off this gun to everyone, firing pellets at distant objects or out of the window. The gun was a pistol, non-automatic. It was amazingly powerful though; it could easily break glass at close range, and smash windows. ...read more.

Everyone stood shocked and people laughed at me as tried to dodge the fire. After this I went back to lessons, and had my lunch. At lunch break, John was still hanging around the form room, showing off his Desert Eagle, but a bit more cautiously, because any minute, Mrs Robinson would be coming back with her daily lunch; a leaf of lettuce, some cherry tomatoes and a big chunk of Morrisons' finest Cantaloupe melon. He shot the odd coke can in the form room, but that was about it. Break ended soon, and the final lessons began and ended. Now it was the end of school, and was I in for a shock when I entered the form room. It was noisy as usual, with everyone shouting and insulting others, doing wrestling moves, punching, kicking and generally beating up James Shaw. ...read more.

Better you than me!" I was furious, sad and betrayed, at the same time. I had no time to react, because then came the lions! John aimed at my chest, and laughing, he also emptied the magazine of 12 pellets onto me. I quickly spun round, and again used my blazer as cover. It was pointless trying to dodge the pellets, as they zoomed past my sides and some over my head, as I ducked. Some managed to get through, and one hit me straight in the stomach! I let out a cry and collapsed on a nearby table. The pain was agonising as I tightly clutched my stomach. When the pellet first made contact, I felt a searing pain, like a knife stabbing me. It stung for a while, and left a mark too. Everyone was laughing a lot and renacting my dodging and getting shot. It is still vivid in my memory today, and I remember the aftermath of John getting suspended. Abhishek Singh 10VM ...read more.