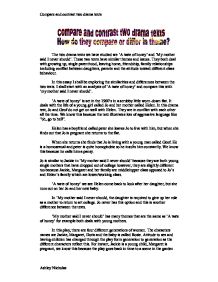 The two drama texts we have studied are 'A taste of honey' and 'My mother said I never should'. These two texts have similar themes and issues. They both deal with growing up, single parenthood, leaving home, friendship, family relationships including conflict between daughters, parents and the attitude toward different class behaviour. In this essay I shall be exploring the similarities and differences between the two texts. I shall start with an analysis of 'A taste of honey' and compare this with 'my mother said I never should'. 'A taste of honey' is set in the 1960's in a scrubby little worn-down flat. It deals with the life of a young girl called Jo and her mother called Helen. In this drama text, Jo and Geof do not get on well with Helen. They are in conflict with each other all the time. We know this because the text illustrates lots of aggressive language like "oh, go to hell". ...read more.

In this play, there are four different generations of women. The characters names are Jackie, Margaret, Doris and the baby is called Rosie. Attitude to sex and having children has changed through the play form generation to generation as the different characters reflect this. For instant, Jackie is a young child, Margaret is pregnant, we know this because the play goes back in time to a scene in the garden where Margaret tell Doris how she feels about her miscarriage. Margaret says, "I thought I didn't want it, till I lost it". Doris, Margaret's mother tells Margaret that she shouldn't have worked while she was pregnant. She seems to think that working was the reason that Margaret lost the baby. This shows that in the 1960's women were supposed to stay at home in bed, resting and not working. Margaret thinks that this idea is very sexist. Later in the characters' lives Jackie challenges her mothers attitudes to sex before marriage. ...read more.

Margaret and her husband are ashamed by single parents. We know that her father is unhappy about Jackie and Rosie because he won't go into the house however Margaret is more relaxed about the situation that Jackie and Rosie are in. she comes to pick up Rosie and Rosie's clothes as she will be her new mother. Jackie is reluctant in giving Rosie to Margaret. Jackie is now free to go to Art College again. This reflects that attitudes towards working mothers have changed from one generation to the next. In conclusion I think both are similar in most of their themes however they differ when it comes to how the mothers react and why they react to the situation. For example Helen wanted Jo to move in with her because she thinks she cant cope and Margaret want Jackie to give the baby to her so she can go back to art college because Margaret is from an upper class family and a young single mother is shamed upon and she also wants to have a better life. ?? ?? ?? ?? Compare and contrast two drama texts Ashley Nicholas ...read more.