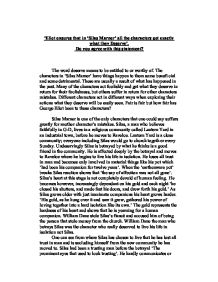 'Eliot ensures that in 'Silas Marner' all the characters get exactly what they Deserve'. Do you agree with this statement? The word deserve means to be entitled to or worthy of. The characters in 'Silas Marner' have things happen to them some beneficial and some detrimental. These are usually a result of what has happened in the past. Many of the characters act foolishly and get what they deserve in return for their foolishness, but others suffer in return for other characters mistakes. Different characters act in different ways when exploring their actions what they deserve will be easily seen. Fair is fair but how fair has George Eliot been to these characters? Silas Marner is one of the only characters that one could say suffers greatly for another character's mistakes. Silas, a man who believes faithfully in G-D, lives in a religious community called Lantern Yard in an industrial town, before he moves to Raveloe. Lantern Yard is a close community; everyone including Silas would go to church together every Sunday. Undeservingly Silas is betrayed by what he thinks is a good friend in the community. He is affected deeply by the betrayal and moves to Raveloe where he begins to live his life in isolation. ...read more.

He is able to marry Nancy Lammeter, a rich villager. He thinks if he were to marry her she would put order in his disorganized life. The name Eliot has used for Nancy's last name 'Lammeter' is a word that suggests measure and order Meter. Godfrey thinks that now no one will ever find out about his secret marriage he can become a nicer less bitter person. Godfrey and Nancy have a child who dies at a young age, which makes Godfrey again into a bitter person. Godfrey has a child with Molly Farren, a daughter Eppie. Godfrey never until his brother's body is recovered tells anyone about Eppie being his daughter. When Dunstan's body is found Godfrey decides to tell the truth about Molly and Eppie. He expects Nancy to act in to the opposite way that she does, she shows some sort of sympathy for Godfrey but wonders why he did not tell her sooner then sixteen years later. Nancy and Godfrey cannot have children so they decide to take back what Godfrey thinks is rightfully his, they decide they want to adopt Eppie. Godfrey does not consider the fact that Eppie has grown attached to Silas. She is now eighteen and has grown up with Silas being her "true father" she explains to Godfrey and Nancy that she wants to stay with Silas and does not want to live with them. ...read more.

Dunstan never considered doing a kind act while he was alive. He only considered doing wrong he deserved the punishment he received. Dunstan was given what he deserved but in an ironic way, he had convinced himself that Silas Marner had fallen and died in the stone pit but he was wrong and it ended up him falling in the stone pit and dying. In this way Dunstan is seen to be getting what he deserved. Godfrey I think does get what he deserves, he did wrong by not claiming Eppie and telling her she was his daughter, and he lied to his friends and family. Godfrey's good intentions are rewarded along with the bad things he has done. He gets what he deserves like Eppie not wanting to be adopted by him. Silas, the man who does no wrong gets the most out of all the characters in the book. He was betrayed in the beginning and Eppie to make up for it. He ends up in the end keeping Eppie with him, getting his gold back and becoming a much more sociable person. He deserved good to happen to him especially after Dunstan stealing his gold. Silas deserved every good thing he got. With this in mind I have recognised that George Eliot's has been fair and makes sure the characters get exactly what they deserve. ...read more.