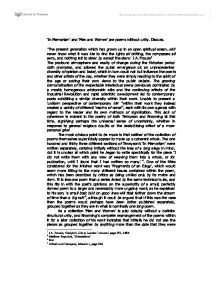 'In Memoriam' and 'Men and Women' are poems without unity. Discuss. "The present generation which has grown up in an open spiritual ocean...will never know what it was like to find the lights all drifting, the compasses all awry, and nothing left to steer by except the stars.' J.A. Froude1 The profound atmosphere and reality of change during the Victorian period both prompted, and allowed the public emergence of, an unprecedented diversity of opinion and belief, which in turn could not but influence the poets and other artists of the day, whether they were simply reacting to the spirit of the age or adding their own views to the public debate. The growing democratisation of the respectable intellectual arena previously dominated by a mostly homogenous aristocratic elite and the continuing effects of the Industrial Revolution and rapid scientific development led to contemporary poets exhibiting a similar diversity within their work. Unable to present a 'uniform perspective of contemporary life' 2within their work they instead created a variety of different 'realms of verse'3, each with its own agenda with regard to the reader and its own methods of signification. This lack of coherence is evident in the poetry of both Tennyson and Browning at this time, signifying perhaps the universal sense of uncertainty, whether in response to general religious doubts or the destabilising effect of a more personal grief. ...read more.

As previously mentioned, 'In Memoriam' is also unified by a form created by the poet and now known as the Tennysonian stanza, consisting of chiasmic rhymed quatrains in iambic tentrameter. The unusual rhyme scheme gives a sense of unity to each stanza as it seems to close in on itself in the middle couplet, thus delaying and undermining the rhyme of the fourth line which seems thus to be just a mournful echo of the first line and reflects the sadness which pervades the whole work. The monotony of 133 different sections in this stanza signifies the fact that there is no real progression for much of the poem and is reminiscent of the monotony of a life lived in grief. Both poets were concerned with the question of how far we are all united in terms of perception. Browning's theory of the imperfection of human knowledge held that one could be certain of nothing except one's own existence and thus he was faced with the problem of how to develop a generally valid argument on the basis of subjective knowledge. He believed that so called knowledge of anything else was dependent on individual faith, which ought to come from the heart as the intellect could not prove it, and this is explored in 'Bishop Blougram's Apology', in which the speaker's argument is so clever and complex that it is difficult to see what he actually arguing. ...read more.

This is principally evident in 'Mesmerism' where the violent power of the speaker over his wife is emphasised by the repetition of a quotation from the service of marriage 'to have and to hold'. He wishes to hold her in order to mould her into a creature of his own will, seeing her own personality as an empty space to be manipulated 'Having and holding,till I imprint her fast On the void at last' . In 'Two in the Campagna' the speaker is unable to adopt the will of his lover, although he wishes to do so, the implication perhaps being that this unification cannot be born of love but must be forced by violence, and thus they are unable to be one for more than a 'good minute' before the closeness inevitably passes and individualism reasserts itself. Browning sees marriage as the constraint imposed by society on its individual members, particularly women. Tennyson by contrast sees marriage as a joyful unification of two like personalities for the equal benefit of both. There are many suggestions in 'In Memoriam' that he and Arthur were as a married couple, for example he talks of his 'widow'd race' and says 'I shall be thy mate no more', as well as the reiterated metaphor of man and wife, and it is clear that their friends regarded them as a unit. ...read more.