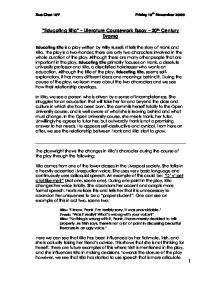 "Educating Rita" - Literature Coursework Essay - 20th Century Drama Educating Rita is a play written by Willy Russell. It tells the story of Frank and Rita. The play is a two-hander; there are only two characters involved in the whole duration of the play. Although there are many other people that are important in the play, Educating Rita primarily focuses on Frank, a dissolute university professor and Rita, a dissatisfied hairdresser who wants an education. Although the title of the play, Educating Rita, seems self-explanatory, it has many different ideas and meanings behind it. During the course of the play, we learn more about the two characters and we see how their relationship develops. In Rita, we see a person who is driven by a sense of incompleteness. She struggles for an education that will take her far and beyond the class and culture in which she had been born. She commits herself totally to the Open University course, and is well aware of what she is leaving behind and what must change. In the Open University course, she meets Frank, her tutor. Unwillingly he agrees to tutor her, but outwardly Frank is not a promising answer to her needs. He appears self-destructive and cynical. From here on after, we see the relationship between Frank and Rita start to grow. The playwright shows the changes in Rita's character during the course of the play through the following: Rita comes from one of the lower classes in the Liverpool society. ...read more.

I'm not gonna try an' rape y' in the middle of The Seagull." Frank: "What an awful pity. You could have made theatre exciting for me again." The actions and movements on stage. In one particular scene in the play, we see that Frank and Rita are sharing food and drink with each other. Although this itself doesn't mean very much, it shows us their feelings for each other. A model of this could be in act one, scene six. "He throws her the apple from his desk which she catches" and "Rita offers him the can of soft drink." Later in the play, however, in act two, scene six, Rita and Frank start arguing. They still make up to each other in act two, scene seven. This shows us that their relationship with each other is still holding strong and they still want to be friends, even though one has upset the other. This example demonstrates how close the two characters have become throughout the length of the play. During the play, we can see Rita demonstrates several of her different moods. Most of the time, she is pleased and enthusiastic about her course at the Open University. We can see this through the actions she makes on the stage. For example: "Rita flounces into the room and goes to the desk." (Act one, scene three) Although we cannot see this action in the play, the audience can see this performed on stage. ...read more.

We can see an example of this in act two, scene four where Rita says: "If it was in an exam what sort of mark would it get?" After passing her exam, Frank asks Rita: Frank: "What are you going to do?" Rita: "I dunno. I might go to France. I might go to me mother's. I might even have a baby. I dunno. I'll make a decision, I'll choose. I dunno." Rita has a lot of freedom now that she's completed her course. Looking at the above quote, I think we now see her as a much more stronger character. At the beginning, she was talking a lot about Denny and her mum, but now she is on her own Rita has not got a freedom which she accomplished herself. She is now capable of making her own decisions in life and this is all because of the education she has pursued for herself. Referring back to the original task question: "How does the playwright show the changes in Rita's character during the course of the play?" William Russell uses many different methods to show that Rita's character changes during the course of the play. They can be shown through Rita's language and speech, her communication with Frank, her relationship with Frank, her mood and emotions, her name, her attitudes towards her work and the movements on the stage. Throughout the play, Rita has gone from one extreme to another and finally reached an equilibrium. ?? ?? ?? ?? Xue Chen 10Y Friday 10th November 2000 1 ...read more.