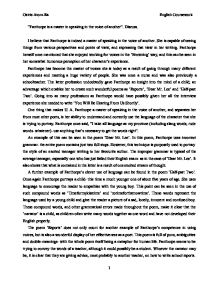 "Fanthorpe is a master in speaking in the voice of another". Discuss. I believe that Fanthorpe is indeed a master of speaking in the voice of another. She is capable of seeing things from various perspectives and points of view, and expressing that view in her writing. Fanthorpe herself once mentioned that she enjoyed working for voices in the 'Browning' way, and this can be seen in her somewhat humorous perception of her character's experience. Fanthorpe has become the master of voices she is today as a result of going through many different experiences and meeting a huge variety of people. ...read more.

An example of this can be seen in the poem 'Dear Mr. Lee'. In this poem, Fanthorpe uses incorrect grammar- the entire poem contains just two full stops. However, this technique is purposely used to portray the style of an excited teenager writing to her favourite author. The improper grammar is typical of the average teenager, especially one who has just failed their English exam- as in the case of 'Dear Mr. Lee'. It also shows that what is contained in the letter is a result of one excited stream of thought. A further example of Fanthorpe's clever use of language can be found in the poem 'Half-past Two'. ...read more.

This poem is full of puns, ambiguities and double-meanings- with the whole poem itself being a metaphor for human life. Fanthorpe seems to be trying to convey the words of a teacher, although it could possibly be a student. Whoever the narrator may be, it is clear that they are giving advice, most probably to another teacher, on how to write school reports. The content is both shocking and wryly humorous. Phrases such as 'Satisfactory should satisfy them' are both very witty and deeply scandalous. This is most probably what Fanthorpe would have intended. Her experience as a schoolteacher enabled herself to analyse a teacher's mind, and to discover the shocking reality of what the teacher is really thinking! Osiris Atom-Ra English Coursework 1 ...read more.