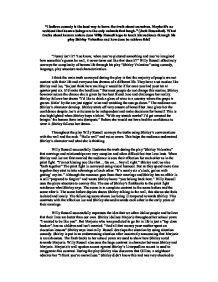 &amp;#147;I believecomedy is the best way to learn the truth about ourselves. Maybe it&amp;#146;s noaccident that human beings are the only animals that laugh.&amp;#148; (Jack Rosenthal).What truths about human nature does Willy Russell hope to teach his audiencethro

"I believe comedy is the best way to learn the truth about ourselves. Maybe it's no accident that human beings are the only animals that laugh." (Jack Rosenthal). What truths about human nature does Willy Russell hope to teach his audience through his play Shirley Valentine and how does he achieve this? "Funny isn't it? You know, when you've pictured something and you've imagined how somethin's gonna be well, it never turns out like that does it?" Willy Russell effectively conveys the complexity of human life through his play "Shirley Valentine" using comedy, language, play structure and characterization. I think the main truth conveyed during the play is that the majority of people are not content with their life and everyone has dreams of a different life. They have a set routine like Shirley and Joe, "So just think how exciting it would be if for once you had your tea at quarter past six. It'd make the headlines." But most people do not change this routine. Shirley however seizes the chance she is given by her best friend Jane and challenges her reality. ...read more.

The following scene shows Joe being ill tempered towards Shirley. This contrasts with the affection Joe and Shirley showed towards each other in the early years of their marriage. Willy Russell successfully expresses the idea that we often idolise people and believe that their lives are better than our own. Shirley idolises Marjorie throughout her school years "I wanted to be like you". But Marjorie who was predicted to go far in life is just a "top class hooker", has no children and isn't married. "And all that money your mother spent on elocution lessons" Shirley says ironically. Russell develops the situation by using situation comedy. Shirley is put in an embarrassing situation after incorrectly announcing that Marjorie is an airhostess. The flash backs to her school years are used to show how Shirley acted towards Marjorie. Willy Russell also uses the huge contrast in character between Shirley and Marjorie. Marjorie's well-spoken accent against Shirley's Liverpudlian accent is used to exaggerate this contrast. During the play Shirley also discovers that Gillian, a neighbour admires her "I think you're marvellous." Shirley didn't know this and was very shocked to discover it, "She really believes" that Shirley could have a lover. ...read more.

During the main film titles fifteen drawings of Shirley Valentine are shown. She is performing various domestic activities including cleaning, making beds, gardening and shopping. Later in the play we discover that Shirley is definitely not a regular housewife but her negative experiences at school colour the rest of her life and prevent her from taking advantage of opportunities that could have allowed her to create and improve herself and follow her dreams. Later in the play Willy Russell uses the caricature of stereotypical tourists, Dougie, Jeanette, Sydney and Thelma are all two-dimensional stereotyped tourists. They won't eat Greek food and would rather eat English food although they came on holiday to Greece "It don't look much like fish to me." Satire is used to help convey this, it is ridiculous that they come on holiday and refuse to experience the culture of Greece. Through the medium of comedy Willy Russell successfully teaches us various truths about human nature. He portrays a ordinary person like Shirley Valentine and shows us her inner most dreams. We see her confidence shattered by her childhood experiences at school and the impact of this on her later life. But Shirley does not give up and finds the courage to go on. In her monologues we observe her learning from her experiences and eventually finding her true self. ...read more.