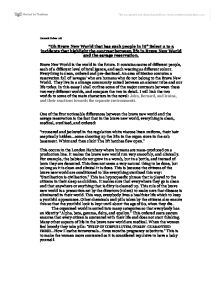 &amp;#147;Oh Brave New World that has such people in it!&amp;#148; Select 2 to 3 incidents that highlight the contrast between life in Brave New World and the savage reservation.

Hannah Calver 10k "Oh Brave New World that has such people in it!" Select 2 to 3 incidents that highlight the contrast between life in Brave New World and the savage reservation. Brave New World is the world in the future. It contains castes of different people, each of a different level of intelligence, and each wearing as different colour. Everything is clean, ordered and pre-destined. An area of Mexico contains a reservation full of 'savages' who are humans who do not belong to the Brave New World. They live in a strange community mixed between an ancient tribe and our life today. In this essay I shall outline some of the major contrasts between these two very different worlds, and compare the two in detail. I will link the two worlds to some of the main characters in the novel: John, Bernard, and lenina, and their reactions towards the separate environments. One of the first noticeable differences between the brave new world and the savage reservation is the fact that in the brave new world, everything is clean, medical, sterilised, and ordered: "trousered and jacketed in the regulation white viscose linen uniform, their hair aseptically hidden...came shooting up the lifts in the organ store in the sub basement. ...read more.

"The passage of an old woman with ophthalmia and a disease of the skin" This would seem disgusting in the brave new world. Although all of this seems awful, it is natural compared to the brave new world, which is completely unnatural. To Lenina Crowne from the brave new world, the savage reservation seems repulsive and disgusting, because of the dirt, blood, and disease. She doesn't think that humans can actually live in the conditions she sees. "Too awful. She shuddered. Oh I wish I had my soma...Ford! Ford! It was too revolting. In another moment she'd be sick." Another big contrast between the brave new world and the savage reservation is the subject of freedom of mind. There are many examples in the brave new world of how the citizens do not have freedom of mind. Some of these are: soma; hypnopaedic conditioning; pre-destination when developing foetus; and social pressures. Soma is a drug that takes the person on a 'trip' or holiday where they can forget about worries and troubles or arguments. It is used to make sure that every citizen is contented; therefore the quality of life is higher. ...read more.

This shows that John is trying to do something better than the others in the savage reservation. He is also doing it because he is lonely and unhappy because of others teasing him. The other savage reservation citizens are conditioning him. The two different worlds are obviously very different from each other, even though one is contained within the other. Even though they are very different, one is not significantly better than the other, not offering the reader an easy choice as to which is the better world. You have to weigh up the good and bad points, including freedom of mind and cleanliness and disease. When John hears about the 'Other world' from his mother Linda, he sees it as a truly amazing place that seems like a fairy tale that could never come true. When he does get to the brave new world, however, he finds that it is not everything he expected and it is not much better than the world he came from. He is one of the few people in the brave new world who have freedom of mind and is the only on who sees it as a bad thing. In conclusion I think that the factors for and against each world are too strong to be able to make a choice between them. ...read more.