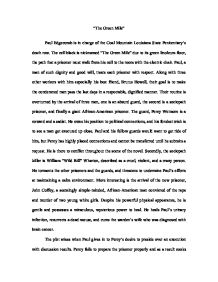 "The Green Mile" Paul Edgecomb is in charge of the Coal Mountain Louisiana State Penitentiary's death row. The cell black is nicknamed "The Green Mile" due to its green linoleum floor, the path that a prisoner must walk from his cell to the room with the electric chair. Paul, a man of such dignity and good will, treats each prisoner with respect. Along with three other workers with him especially his best friend, Brutus Howell, their goal is to make the condemned men pass the last days in a respectable, dignified manner. Their routine is overturned by the arrival of three men, one is an absurd guard, the second is a sociopath prisoner, and finally a giant African-American prisoner. The guard, Percy Wetmore is a coward and a sadist. He owes his position to political connections, and his fondest wish is to see a man get executed up close. ...read more.

Percy fails to prepare the prisoner properly and as a result cooks him to death rather than electrocuting him. The second half of the plot concerns the rapidly approaching moment of John's own execution. Paul, by this point is convinced not only that John is innocent, but also that he is a messenger of sorts from God. Paul does not want to have to answer for killing John by saying that he was just doing his job. He offers john a chance to escape, but he refuses, saying he is too tired and weary of seeing suffering and cruelty around him. On an accuracy level, this novel shows a fair example of a Christian's point of view. John Coffey, to the many, he is a convicted child killer. To a few, namely the prison guards, he is an innocent man and one of God's true miracles. His powers extend to visions and he directly feels the pain of others. ...read more.

Through further research, I came across a surprising fact on John Coffey's name. His name is "just like the drink, only not spelled the same". Notice the initials; John Coffey is a Christ figure. Jesus Christ is the drink! 1Now on the last day, the great day of the feast, Jesus stood and cried out, saying, "If anyone is thirst, let him come to Me and drink." (John 7:37). John's initials are not accidental, in some ways. I agree that he is capable of miracles, specifically healing the sick. But does that make him a Christ-like character? Only at the most superficial level. Jesus does not perform miscellaneous miracles. He defined a new system of ethics, established his twelve disciples to follow him and to determine to spread His gospel. Therefore, the fact that his miracles can perform many great things; he has "infected" others with life. He is a faith-healer version of Christ. 1 Canadian Bible Society. Good News Bible. (Great Britain, 1976) John 7:37 ?? ?? ?? ?? ...read more.