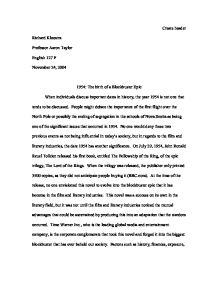 1954: The birth of a Blockbuster Epic

Create header Richard Kloostra Professor Aaron Taylor English 127 F November 24, 2004 1954: The birth of a Blockbuster Epic When individuals discuss important dates in history, the year 1954 is not one that tends to be discussed. People might debate the importance of the first flight over the North Pole or possibly the ending of segregation in the schools of Nova Scotia as being one of the significant issues that occurred in 1954. No one would deny these two previous events as not being influential in today's society, but in regards to the film and literary industries, the date 1954 has another significance. On July 29, 1954, John Ronald Reuel Tolkien released his first book, entitled The Fellowship of the Ring, of the epic trilogy, The Lord of the Rings. When the trilogy was released, the publisher only printed 3500 copies, as they did not anticipate people buying it (BBC.com). At the time of the release, no one envisioned this novel to evolve into the blockbuster epic that it has become in the film and literary industries. This novel was a success on its own in the literary field, but it was not until the film and literary industries noticed the mutual advantages that could be ascertained by producing this into an adaptation that the stardom occurred. Time Warner Inc., who is the leading global media and entertainment company, is the corporate conglomerate that took this novel and forged it into the biggest blockbuster that has ever beheld our society. ...read more.

In doing this, New Line and Time Warner were able to release one movie each year for the next three years to keep the hungry fans happy and content with a yearly injection of another Rings movie. In total, the entire cost for producing The Rings was $310 million, with New Line and Time Warner footing the bill (Gilsdorf, 31). Since all three movies were completed together in their entirety, the first film of The Rings had to grab the audience immediately, so that they felt compelled to finish the epic ride. When the Fellowship of the Rings hit the box office, it was a success grossing $66.1 million in the first day and achieved $314,776,170 million in total box office revenue (Variety.com). Jackson and New Line Cinema were ecstatic with the figures this movie achieved, and the first film immediately put New Line and Time Warner heads above their competition. With the success of the movie, Warner Books decided to release a new rendition of the trilogy, with a nice glossy cover consisting of pictures of the movie characters on the cover. The Rings trilogy has arguably become the most profitable fictional work of all time, and hungry commercial forces were ready to produce the tie-in products for the movie. Items such as children's novels, hobbit cake decoration, balrog votive candleholders, and even Aragorn shot classes were made (Gilsdorf, 33). Anything that could have been thought to create a profit by merchandising was made, and shaped Tolkien's name into more of a brand name than an author. ...read more.

When industries from the film and literary field conjoin together in anticipations of achieving a blockbuster, it is crucial for them to examine the outcome from different angles. Finances, viewer's perceptions, history of the novels, companies, and previous adaptations, are all areas that must be considered. It is difficult when multiple, separate conglomerates are discussing opinions on a specified project because they are all looking out for their own interests by trying to increase themselves financially first. That is why the Lord of The Rings worked for Time Warner and their affiliated companies. These companies were already part of the giant conglomeration of Time Warner. With not having to cover their own assets first, Warner was able to compose a spectacular adaptation that appeased the millions and millions of fans, while still benefiting immensely in revenue. Any corporations that are financially stable in both the film and literary industry may try to create an adaptation. Whether or not they are successful in this venture is determined by the corporation's ability to mutually agree upon what their expected advantages are to ascertain. If done correctly, every entity on the spectrum concerning the film, whether it be the viewers, the producers, or whoever will be satisfied completely. This fifty-year journey that began in 1954 when Tolkien's trilogy was released, will be remembered by every one of the film and literary industries as the starting foundation that spawned the greatest blockbuster epic that has ever been created. ...read more.