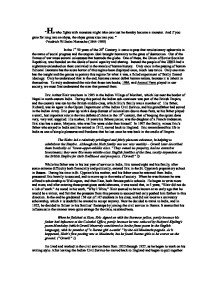 "He who fights with monsters might take care lest he thereby become a monster. And if you gaze for long into an abyss, the abyss gazes also into you. " -Friedrich Wilhelm Nietzsche (1844-1900) In the 1st 50 years of the 20th Century, it came to pass that revolutionary upheavals in the name of social progress and the utopian ideal brought humanity to the gates of destruction. Out of the flames of war arose several colossuses that bestrode the globe. One of these, the Union of Soviet Socialist Republics, was founded on the ideals of social equality and sharing. Instead the people of the USSR had a nightmare unleashed on them unrivaled in the annals of human history. Only once in the passing of human fictional literature has the acute horror of this regime been displayed once, much less twice. Only one man has the insight and the genius to portray this regime for what it was, a failed experiment of fatally flawed ideology. Only he understood that in the end, humans cannot defeat human nature, because it is inherit in themselves. To truly understand the role that these two books, 1984, and Animal Farm played in our society, we must first understand the man that penned them. Eric Arthur Blair was born in 1903 in the Indian Village of Motihari, which lies near the border of Nepal in north-eastern India. During this period the Indian sub-continent was part of the British Empire, and the country was run by the British middle class, which Eric's family was a member of. His father, Richard, was an agent in the Opium Department of the Indian Civil Service, and his grandfather had served in the Indian Army. Eric grew up with a deep distrust of colonialism due to these facts, as his father played a small, but important role in the two defeats of china in the 19th century, that of keeping the opium dens very, very well supplied. ...read more.

At this point in the story one of the two final major characters is revealed. His name is Old Benjamin and he is a donkey. He represents the cynical older generation, which is too inactive politically to do much, yet when he hears of what is going to happen to boxer, he tries to get the animals to move against Napoleon, or at least attempt a rescue. He is much like many of the nobility, upper class, and older generations of Russia that understood the plight of the Czars and did nothing until it was to little, to late. The other final major character is Moses, Mr. Jones's pet raven. He is the only animal that did not hear Old Major's speech in the beginning, and is the only animal to not work. The special part about this raven is that he represents the Orthodox Church, in all its glory. Orwell narrates, "The pigs had an even harder struggle to counteract the words put about by Moses, the tame raven. Moses, who was Mr. Jones's especial pet, was a spy and a tale-bearer, but he was also a clever talker. He claimed to know of the existence of a mysterious country called Sugarcandy Mountain, to which all animals went when they died. It was situated somewhere up in the sky, a little distance beyond the clouds, Moses said. In Sugarcandy Mountain it was Sunday seven days a week, clover was in season all the year round, and lump sugar and linseed cake grew on the hedges. The animals hated Moses because he told tales and did no work but some of them believed in Sugarcandy Mountain, and the pigs had to argue very hard to persuade them that there was no such place." ("Animal Farm" 3) Eventually the pigs exile Moses to the farmhouse, and he is forgotten. Yet as Napoleon becomes more and more like Mr. ...read more.

He looks forward to the bullet, they will kill him some day. Now he realizes how pointless it was to resist. He loves Big Brother! ("Summary of 1984"4) "On each landing, opposite the lift shaft, the poster with the enormous face gazed down from the wall. It was one of these pictures which are so contrived that the eyes follow you about when you move BIG BROTHER IS WATCHING YOU, the caption beneath ran." - from Nineteen Eighty-Four ("1984" 5) In the end Winston succumbed to the power of the party. In many ways his situation was hopeless. None of the people that try to do what he did in the USSR were successful until economic and outside political pressures forced her collapse. They crushed his mind, telling him things over and over, things that he would never accept; yet he subconsciously did. Before he could react, his mind had already been defeated. Orwell shows just how powerful the force of the party is. Yet 1984 does contain hope, and that is the power of the individual to secretly resist, to enjoy, to savor, and to fight, deep down. To hole up these emotions, and allow human nature to feed off of them. In the end, while the party may be all-powerful in the minds and hearts of its victims, the human soul cannot be conquered. No propaganda can break it, no hatred is too powerful for its influence, because in the end, the human spirit lays not in the domain of humans, but in the hands of God himself, that made them in his image so that they could worship him, and who he gave his only begotten son so that they could find salvation. Bottom of Form 1 Johnson, Richard. 2002. "Biography of George Orwell." Online. http: //www.levity.com/corduroy/orwell.htm No Author. 2002. "Biography of George Orwell." Online. http://www.k-1.com/Orwell/bio.htm. No Author. 2002. "Animal Farm." Online http://www.k-1.com/Orwell/animf.htm. No Author. 2002. "Summary of 1984." Online. http://www.k-1.com/Orwell/1984.htm Orwell, George. 1949. 1984. Secker and Warburg Publishers. London. Williams, Rhondri. 2002. "Orwell's Political Messages in Animal Farm, Homage to Catalonia, and Nineteen Eighty-Four." http://www.k-1.com/Orwell/will.htm ...read more.