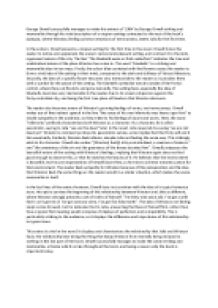 ï»¿George Orwell successfully manages to make this extract of '1984' by George Orwell striking and memorable through his vivid description of a utopian setting contrasted to the rest of the book's dystopia, where Winston, feeling common emotions of nervousness, meets Julia for the first time. In the extract, Orwell presents a utopian setting for the first time in the novel. Orwell forces the reader to notice and appreciate the scene's natural and pleasant setting, and contrast it to the dark, oppressed nature of the city. The line "The bluebells were so thick underfoot" indicates the true and undisturbed nature of the place Winston has come to. The word "bluebells" is a striking and memorable idea in two ways. ...read more.

Here, the word "inferiority" perfectly characterises both Winston as a character. As a character, he is often pessimistic, saying to Julia "we are the dead" later in the novel. Julia responds by saying "we are not dead yet". Winston's comment portrays his pessimistic nature, as he implies that the Party will catch him eventually. Similarly, Winston feels inferior, despite Julia not feeling the same way. This strikingly adds to his character. Orwell also writes "[Winston] feel[s] dirty and etiolated, a creature of indoors." and "the sweetness of the air and the greenness of the leaves daunted him". Orwell juxtaposes the beautiful nature of the setting with Winston's feelings, implying that Winston again does not feel good enough to deserve this, or that he matches the beauty of it. ...read more.

Iâ€™ve got a wife that I canâ€™t get rid of. Iâ€™ve got varicose veins. Iâ€™ve got five false teeth". The idea of Winston not feeling inept carries forward, but he indicates that to Julia, presenting the flaws of himself first, rather than how a typical first meeting would comprise of displays of perfection and compatibility. This is particularly striking to the audience, as it displays the difference and importance of this relationship to typical ones. This extract is vital in the novel. It displays and characterises the relationship that Julia and Winston have, the relationship later being the thing that keeps Winston from mentally being reduced to nothing in the last part of the book. Orwell successfully manages to make the scene striking and memorable, a theme which carries throughout the book, and being a reason why the book is important today. ...read more.