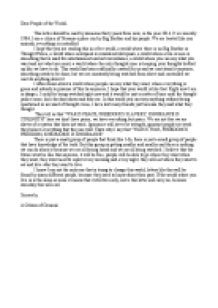 1984 letter of warning to the future.

﻿Dear People of the World, This letter should be read by someone thirty years from now, in the year 2014. It is currently 1984, I am a citizen of Oceania a place run by Big Brother and his people. We are treated like zoo animals, everything is controlled. I hope that you are reading this in a free world, a world where there is no Big Brother or Thought Police, a world where newspeak is considered old speak, a world where a tele screen is something that is used for entertainment and not surveillance, a world where you can say what you want and not what you must, a world where the only thoughtcrime is keeping your thoughts bottled up like we have to do. ...read more.

Right now I am in danger, I could be being watched right now and it would be just a matter of time until the thought police come, kick the door down and take me. In this world you cant say anything without being questioned or accused of thought crime, I have lost many friends just because they said what they thought. They tell us that ?WAR IS PEACE, FREEDOM IS SLAVERY, IGNORANCE IS STRENGTH? here we don't have peace, we have everything but peace. We are not free we are slaves of a system that does not work. ...read more.

I believe that the future wont be like this anymore, it will be free, people will be able to go where they want when they want, they wont need to report every morning and every night, they will eat where they want to eat and love who they want to love. I know I am not the only one that is trying to change this world, letters like this will be found by many different people, because they need to know about their past. If the world where you live in is the same as mine it means that it still too early, leave this letter and carry on, because someday this will end. Sincerely, A Citizen of Oceania ...read more.