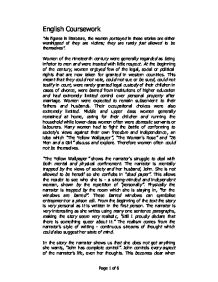 English Coursework "As figures in literature, the women portrayed in these stories are either worshipped of they are victims; they are rarely just allowed to be themselves". Women of the nineteenth century were generally regarded as being inferior to men and were treated with little respect. At the beginning of the century, women enjoyed few of the legal, social or political rights that are now taken for granted in western countries. This meant that they could not vote, could not sue or be sued, could not testify in court, were rarely granted legal custody of their children in cases of divorce, were barred from institutions of higher education and had extremely limited control over personal property after marriage. Women were expected to remain subservient to their fathers and husbands. Their occupational choices were also extremely limited. Middle and upper class women generally remained at home, caring for their children and running the household while lower-class women often were domestic servants or labourers. Many women had to fight the battle of conforming to society's views against their own freedom and independence, an idea which "The Yellow Wallpaper", "The Woman's Rose" and "26 Men and a Girl" discuss and explore. Therefore women often could not be themselves. "The Yellow Wallpaper" shows the narrator's struggle to deal with both mental and physical confinement. The narrator is mentally trapped by the views of society and her husband, John. She is not allowed to be herself so she confides in "dead paper". ...read more.

While she would usually call him "John" or "my husband" she now refers to him as "that man", which can underline the fact that her strength as a woman and also her strength as a character has increased. The end of the story shows a switch in power between the narrator and John. At the beginning John had all the power, however at the end the narrator has power over him. We can see this when John comes into the locked room and faints in her path, "now why should that man have fainted?", [...] "I had to creep over him every time" which can also suggest the fact that women can gain temporary control over men, but they will never seem to be free of them. At the end of the story the narrator believes she has won, "I've got out at last" by setting the woman free from behind the main pattern of the wallpaper. By setting the woman free from behind the wallpaper it can also suggest to the narrator is being set free as well. The narrator made a huge sacrifice in escaping and as a result, at the end of the story, we see that she has lost her narrative; her writing has become less fluent and fragmented, with no structured pattern. This can be seen on the last two pages with the extensive use of exclamation marks. There would be many social consequences of the narrator's actions. ...read more.

It represents faith in women, showing that they can be friends and have solidarity. The woman gave the rose to the narrator showing the unity of women. Olive Schreiner has emphasised the colour white as the colour is shown through the rose, showing purity and innocence this could be seen as a characteristic of the woman as "she was dressed in pure white". However, the narrator is wearing black which shows the contrast not only in colours, but in personalities. Nevertheless the rose and the men bring both the women together. From the three stories that I have studied, I have learnt that in the nineteenth century many women were not treated equally. In the nineteenth century many men believed themselves to be more intelligent than women. This was a fair conclusion as women were rarely educated beyond reading and writing and where banned form higher education institutions. In "The Yellow Wallpaper" the narrator's husband is very patronising. He treats her as if he was her father, he refers to the narrator as "little girl" which suggests that she is not seen as a real adult. Many men also believed that they could idolise a girl one day and then the next pretend she did not exist. In "The Woman's Rose" the men leave the woman for the narrator as she is "new". In the stories I have studied, the female characters are portrayed as being worshipped or victimised. They all respond to their characters role in different ways, suggesting that women could not be themselves in the nineteenth century. ?? ?? ?? ?? Page 1 of 6 ...read more.