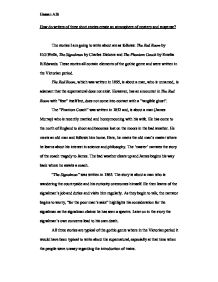 How do writers of three short stories create an atmosphere of mystery and suspense? The stories I am going to write about are as follows: The Red Room by H.G.Wells, The Signalman by Charles Dickens and The Phantom Coach by Emelia B.Edwards. These stories all contain elements of the gothic genre and were written in the Victorian period. The Red Room, which was written in 1895, is about a man, who is unnamed, is adamant that the supernatural does not exist. However, has an encounter in The Red Room with "fear" itself but, does not come into contact with a "tangible ghost". The "Phantom Coach" was written in 1852 and, is about a man (James Murray) who is recently married and honeymooning with his wife. He has come to the north of England to shoot and becomes lost on the moors in the bad weather. He meets an old man and follows him home. Here, he meets the old man's master where he learns about his interest in science and philosophy. The 'master' narrates the story of the coach tragedy to James. The bad weather clears up and James begins his way back where he awaits a coach. ...read more.

Later on in the story the signalman's own concerns lead to his own death. The narrator takes an interest in the signalman but, thinks he has a mental predicament. The narrator's dialogue with the signalman indicates he is caring as he takes time out to listen to him, "What is your trouble?" however it can be argued the narrator's curiosity leads him to become nosy "I will come at eleven". This shows he may be interfering rather than helping as he has nothing else to do in his unused time. In his spare time he taught himself a "language" during his "lonely hours" but had "grown used to it" and, in relation to his "lonely hours" we can perceive that the signalman had a lot of time in order to teach himself. Moreover, this highlights the feeling of loneliness in comparison with the other two stories. During the opening paragraph the signalman is ignorant of the narrator "he looked up at me without replying" therefore, creating immediate suspense. The signalman is afraid of another tragedy "I am troubled, sir, I am troubled" this conveys his feeling of "anxiety" as he feels responsible for the deaths of the previous tragedies. ...read more.

This adds an effect of suspense by the conveyance of a tragedy where, in both stories we have mystery and dramatisation of the supernatural. In all three stories connotations of darkness, negativity and loneliness are portrayed throughout adding to the build up of mystery and suspense. We know this because words such as "frozen" and "solitary" are used in all stories adding to the notion of isolation. I prefer "The signalman" because I prefer stories with a mysterious ending or any mystery in the story itself. I like the beginning of "The Signalman" as the narrator assumes the signalman is ill-mannered by giving no reply therefore, creating a first impression of mystery and suspense. However in "The Red Room" the three old people stayed together when the hero came out of the room looking at him in an eerie way. I knew immediately that the hero did something wrong or something negative was about to happen. I knew this because the deformed characters seem terrifying and mysterious. Also, the use of short sentences in "The Red Room" conveys a sense of panic and dread. I like it when you don't know what is about to happen in order to keep the reader in suspense therefore building tension. ?? ?? ?? ?? Hassan Alli ...read more.

This is, on the whole, a good analytical response that looks at the language, settings and themes in the text; however when looking at more than one text, spend more time finding links and differences between the texts. In this case more of the findings could have been linked to the Gothic genre.