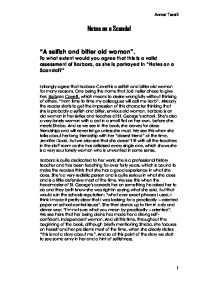 A selfish and bitter old woman. To what extent would you agree that this is a valid assessment of Barbara, as she is portrayed in Notes on a Scandal&quot; by Zoe Heller?

Notes on a Scandal "A selfish and bitter old woman". To what extent would you agree that this is a valid assessment of Barbara, as she is portrayed in "Notes on a Scandal?" I strongly agree that Barbara Covett is a selfish and bitter old woman for many reasons. One being the name that Zo� Heller chose to give her; Barbara Covett, which means to desire wrongfully without thinking of others. "From time to time my colleagues will call me Barb". Already the reader starts to get the impression of this character thinking that she is probably a selfish and bitter, envious old woman. Barbara is an old woman in her sixties and teaches at St. George's school. She's also a very lonely woman with a cat in a small flat on her own, before she meets Sheba. And as we see in the book, she craves for close friendships and will never let go unless she must. We see this when she talks about her long friendship with her "closest friend" at the time, Jennifer Dodd. But we also see that she doesn't fit with all the teachers in the staff room as she has criticised every single one, which shows she is a very sour lonely woman who is unwanted in some sense. ...read more.

Though she generally looks like a middle class person, she seems to compare and think that she has characteristics which are better than Sheba's and therefore counts herself, in a way, from the upper class, "Any objective comparison would have to rate me the more educated woman, I think". This shows from her point of view, how envious and jealous she is of Sheba. She is such a self-obsessive person and so critical, she constantly compares other people and talks about them and their issues. She criticises people around her not knowing that she is more twisted than them. She slowly starts studying Sheba and her every move as the days go by, seeing her ways, her personality and eventually, her lifestyle. She acts as if she is obsessed with her, and the reader starts to think - with Barbara unmarried at such an age and so masculine - that she might fancy Sheba, the way she describes her: "of course, I thought. She's very good-looking", in other words, she might be lesbian. She wouldn't have wrote the diary if she weren't so keen about Sheba, she mentions every single detail about her, the way Sheba thinks, the way she talks, her body-shape and texture, she basically studies her like she would study history. ...read more.

"Back when I was first getting to know her, Sheba seemed invincibly happy; a modern wonder of contentment. Her life with Richard - the dinner parties, the French holidays, the house buzzing with colleagues and children and ex-wives and family friends. A picnic in Regent's Park, a walk through Highgate Cemetery, a trip to the bethel Green children's museum. It was rare for me to see Sheba alone." This proves that she doesn't have a great social life or even a family to enjoy her time with. In conclusion, Barbara, a wicked old lady, got what she wanted; she won Sheba over and in a way, owned her. "And she knows, by now, not to go too far without me". Despite the feud Sheba had with her over the acknowledgment of the diary, Barbara found a way to keep her, she is so selfish that she won't let go, she wants to be with someone; she doesn't care about Sheba as much as she cares about being left alone, and worse, she lies to her every day, by writing that diary. "We don't have secrets, Sheba and I". ?? ?? ?? ?? Anmar Teraifi 1 ...read more.