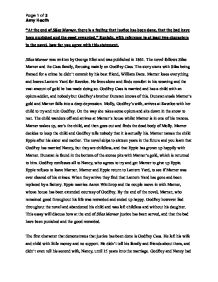 At the end of Silas Marner, there is a feeling that justice has been done, that the bad have been punished and the good rewarded. Explain, with reference to at least two characters in the novel, how far you agree with this statem

"At the end of Silas Marner, there is a feeling that justice has been done, that the bad have been punished and the good rewarded." Explain, with reference to at least two characters in the novel, how far you agree with this statement. Silas Marner was written by George Eliot and was published in 1861. The novel follows Silas Marner and the Cass family, focusing mainly on Godfrey Cass. The story starts with Silas being framed for a crime he didn't commit by his best friend, William Dane. Marner loses everything and leaves Lantern Yard for Raveloe. He lives alone and finds comfort in his weaving and the vast amount of gold he has made doing so. Godfrey Cass is married and has a child with an opium addict, and nobody but Godfrey's brother Dunstan knows of this. Dunstan steals Marner's gold and Marner falls into a deep depression. Molly, Godfrey's wife, arrives at Raveloe with her child to try and ruin Godfrey. On the way she takes some opium and sits down in the snow to rest. The child wanders off and arrives at Marner's house whilst Marner is in one of his trances. ...read more.

Nancy also disagrees about them adopting; "The adopted child, she was convinced, would never turn out well, and would be a curse to those who had wilfully and rebelliously sought what it was clear that, for some high reason, they were better without." (Chapter 17, Page 157) Nancy believes that they aren't supposed to have children, and they would be going against that by adopting, which would cause themselves and the child misfortune. This means that Godfrey is without an heir, and the couple remain childless. When Godfrey finally tells Nancy about his wife, and admits that Eppie is his daughter, she is completely fine with it. She even tells him that she wishes he had told her sooner so that they could have raised her themselves. They both agree that they will ask Eppie to come live with them. But Eppie refuses their offer; "I can't leave my father, nor own anybody nearer than him." "I couldn't give up the folks I've been used to."(Chapter 19, Page 169) As Eppie has grown up with and been raised by Marner, she thinks of him as her father, not Godfrey, and therefore doesn't wish to leave Marner. ...read more.

He sees this as an opportunity to repay his debt to Godfrey and also get some money for himself at the same time. Dunstan is also very lonely; "To be sure, the neighbours said it was no matter what became of Dunsey - a spiteful, jeering fellow, who seemed to enjoy his drink the more when other people went dry..." This is saying that nobody really cares what happens to Dunstan. He doesn't care about anybody but himself, and he enjoys other people suffering, so why should they care about him. When Dunstan is finally found in the stone pits, Godfrey seems more bothered at the fact that Dunstan stole the money and the shame that this will cause him, rather than fact that his brother had died. In the end Dunstan dies a very early and lonely death. I think that this is a result of his actions as he lived a very lonely life and was greedy, and then died alone surrounded by money. To conclude I agree with the statement as Godfrey and Dunstan both got punished for what they did. Godfrey didn't want Eppie in the beginning and then when he did want her, she didn't want him. Dunstan blackmailed his brother and stole and ended up dead. ?? ?? ?? ?? Page 1 of 3 Amy Heath ...read more.