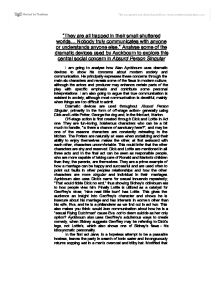 They are all trapped in their small shuttered worlds Nobody truly communicates with anyone or understands anyone else. Analyse some of the dramatic devices used by Ayckbourn to explore this central social concern in Absu

"They are all trapped in their small shuttered worlds... Nobody truly communicates with anyone or understands anyone else." Analyse some of the dramatic devices used by Ayckbourn to explore this central social concern in Absurd Person Singular I am going to analyse how Alan Ayckbourn uses dramatic devices to show his concerns about modern society and communication. He principally expresses these concerns through the main six characters and reveals some of the flaws in modern culture, although the actors and producer may enhance certain parts of the play with specific emphasis and contribute some personal interpretations. I am also going to argue that true communication is existent in society, although most communication is deceitful, mainly when things are too difficult to admit. Dramatic devices are used throughout Absurd Person Singular, primarily in the form of off-stage action- generally using d**k and Lottie Potter, George the dog and, in the third act, Marion. Off-stage action is first created through d**k and Lottie in Act one. They are fun-loving, boisterous characters who can be a bit much to handle, "Is there a chance of sanctuary here?", and may be one of the reasons characters are constantly retreating to the kitchen. The Potters are naturally at ease when socializing and their ability to enjoy themselves makes the other, at first awkward with each other, characters uncomfortable. This could infer that the other characters are shy and reserved. ...read more.

This could have been Eva's "plan"; to get attention and sympathy and use it against the others so she is ultimately the leader or it could have been merely a cry for help. Marion is utilized as a dramatic device in the first half of act three, again as an off-stage character. By this point she has reached such a stage of depression she has imprisoned herself in her bedroom, "almost in a state of hibernation", attempting to drink her troubles away whilst Geoffrey dubiously denies she is an alcoholic. He clearly has no communication with his wife whatsoever, "Drink? No I don't honestly think so" and is simply no longer caring, or maybe he simply just cannot admit that his wife is an utter wreck. Ronald, too, seems uninterested in her and Eva seems to be the only one with real concern for her. This shows how Eva has developed into a more confident and pronounced person, the complete opposite of Marion who seems to have travelled backwards. Marion also compares how other characters have developed; Ronald has continued to deteriorate financially and in character and Sidney and Jane have become a success but they still continue their over-enthusiastic and cringe-worthy approach. Another frequently used dramatic device exercised by Ayckbourn is the use of black humour. Black humour is a form of comedy which the audience knows they should not be laughing at, because of its unethicality, yet they still enjoy it as it makes a more serious subject easier to cope with by ridiculing it. ...read more.

Eva has, too, grown desperate for attention and endeavours to be noticed in Act two by trying repeatedly to commit suicide, although she is an inspiration for Marion as Eva managed to get herself out of that state and Marion hopes that she can too. "They are all trapped in their small shuttered worlds... Nobody truly communicates with anyone or understands anyone else." This statement is an exaggeration and is also slightly ambiguous. Most communication is indefinite; some aspects of it are true and also false. Also the reliability of what is being said relies greatly on the environment. Some may feel dominated by others or feel they have to be more respectful to them to help them climb the social/career ladder. There is too a real contrast between the innocence of words and the characters saying them. Furthermore true communication can be damaging and maybe the fact that people remain in "small, shuttered worlds" is to protect others from themselves. How the characters communicate with each other exploits the audience to ambivalence and allows them to dwell on how contact varies between characters and how they influence each other. I believe the majority of people would benefit from seeing this play; not only is an absolute hoot, it also exposes the audience to social, often slightly absurd, situations which they can learn from. Whoever wrote the above quote clearly has social issues of their own and I recommend that he/she needs to see a psychiatrist to discuss this in further detail as this person is far too cynical of this fabulous play. ...read more.