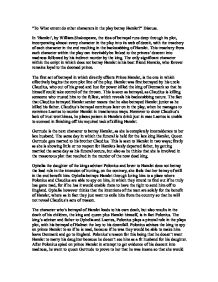 To What extent do other characters in the play betray Hamlet? Discuss.

"To What extent do other characters in the play betray Hamlet?" Discuss. In 'Hamlet', by William Shakespeare, the idea of betrayal runs deep through its plot, incorporating almost every character in the play into its web of deceit, with the treachery of each character in the end resulting in the backstabbing of Hamlet. This treachery from each character within the play can inevitably be linked to the princes' descent into madness followed by his indirect murder by the king. The only significant character within the script in which does not betray Hamlet is his best friend Horatio, who forever remains loyal to the doomed prince. The first act of betrayal in which directly effects Prince Hamlet, is the one in which effectively begins the core plot line of the play. ...read more.

This is seen to Hamlet in two ways; firstly as she is showing little or no respect for Hamlets lately departed father, by getting married the same day as his funeral occurs, but also as he thinks that she is involved in the treasonous plot that resulted in the murder of the now dead king. Ophelia the daughter of the kings adviser Polonius and lover to Hamlet does not betray the lead rule in the intension of hurting, on the contrary, she feels that her betray of will in the end benefit him. Ophelia betrays Hamlet through luring him to a place where Polonius and Claudius are able to spy on him, in which they intend to find out if he truly has gone mad, for if he has it would enable them to have the right to send him off to England. ...read more.

After Polonius spied on prince Hamlet in attempt to get evidence of his descent into madness, he went to queen Gertrude to prove to her that he was insane so that she would make him leave, however the fact that he was in the room at the time resulted in his death by hamlet, which in turn caused one way or the other the deaths of his children and the rest of the royal family later on in the play. Laertes did not necessarily betray Hamlet in the same sense as everyone else did, he just seeked revenge for a crime Hamlet had commit. However the action in which the son of Polonius decided to his revenge with, could be counted as betrayal, for he broke the rules of engagement within there duel, plus succeeded in taking his life in an underhanded back stabbing way. ...read more.