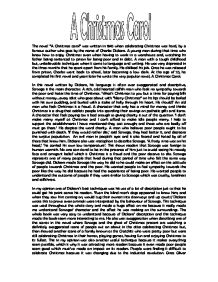 The novel "A Christmas carol" was written in 1843 when celebrating Christmas was hard, by a famous author who goes by the name of Charles Dickens. A young man during that time who knew how to enjoy Christmas even when having to work in a warehouse and, watching his father being sentenced to prison for being poor and in debt. A man with a tough childhood but, unbelievable techniques when it came to language and writing. He was very depressed in the three months that he spent apart from his family. He disliked his job. Once he was released from prison, Charles went back to school, later becoming a law clerk. At the age of 25, he completed his first novel and years later he wrote the very popular novel, A Christmas Carol. In this novel written by Dickens, his language is often over exaggerated and descriptive, Scrooge is the main character. A rich, cold hearted selfish man who feels no sympathy towards the poor and hates the time of Christmas. 'What's Christmas to you but a time for paying bills without money...every idiot who goes about with "Merry Christmas" on his lips should be boiled with his own pudding, and buried with a stake of holly through his heart. He should!' An old man who feels Christmas is a fraud. A character that only has a mind for money and thinks Christmas is a drug that addicts people into spending their savings on pathetic gifts and items. A character that feels paying tax is bad enough so giving charity is out of the question. 'I don't make merry myself at Christmas and I can't afford to make idle people merry. I help to support the establishments I have mentioned-they cost enough; and those who are badly off must go there.' He despises the word charity. A man who believes poor people ought to be punished with death. ...read more.

He now feels a bit more for the poor. Tiny Tim is used as a character in this book very well. A young kind hearted boy that represents Scrooge when he was young. A poor and happy child with a big heart just like Scrooge. Even with a disability he was still cheerful and happy which once again Dickens intended to do because he wanted people to understand that you can be happy no matter what the situation is. Dickens made his readers feel sympathy for the poor Tiny Tim with the language the character used. 'God bless us everyone!' A young child with a disability as well as a kind loving heart. Again Dickens wanted his readers to remember to fell sympathy for the poor. The final scene Scrooge is shown is a scene of Scrooge's nephew, niece, friends and family enjoying a Christmas party in which Scrooge was invited but rejected. There all playing games and Fred who is Scrooge's nephew wishes his uncle Scrooge came to the party. Scrooge is enjoying this scene to and does not want to leave. 'Here is a new game,' said Scrooge. 'One half hour, Spirit, only one!' Scrooge is now being entertained by the party. Fred proposes to drink to Scrooge's health. 'and it would be ungrateful not to drink his health. This proves to Scrooge that there is someone else other than himself that also cares for him. At the end of the journey the Ghost of Christmas present shows Scrooge something that strikes Scrooge like an electric shock. The ghost shows Scrooge two very hideous, frightful and wretched children that represent doom and belong to man's. All those that deny them bide their doom. The boy's name is Ignorance and the girls name is Want. The ghost claims the boy should be most feared because his brow represents doom. Scrooge screams other ways to stop these inhuman children. ...read more.

Real life aspects may decide how quickly you change for example you may be more considerate if you saw a person get shot however if you read about it in a book you may not even be affected by it. The more you reed the more you are influenced by books. Scrooge changed very quickly but that was because he had a real life witness of the poor and Christmas and he also changed quickly because he was threatened that he would face the same fate his best friend Marley did if he didn't change. People will change as they grow up because they will begin to understand life better. Your attitude towards changing may decide whether you want to change. How quickly and whether you change may also be decided because of the situation. You might have to rob houses if you are poor because that may be your only way of gaining a living. As you can see how quickly and whether you change can be decided by many things. One thing that has to be remembered is that you yourself decide whether you change and that may decide the outcome of your life. The final thing that I am going to be talking is about whether the poor need charity. I feel they do. If you are poor because of your health or lack of family, I think you need the charity. I think those that are trying to earn a living but are still poor deserve charity. They earn it by their hard work. If you are lazy and can't be bothered to earn some money then those people should not receive charity. No matter how poor you are you should always try your best to make something of yourself just like Charles Dickens. You may need charity but you shouldn't rely on it because you never know when you're going to stop receiving it. Charity will always be there to help you but you should always look beyond it and find the path to a better life. ...read more.