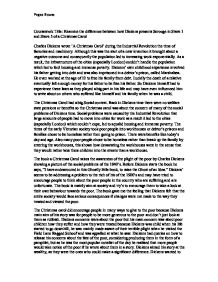 Coursework Title: Examine the difference between how Dickens presents Scrooge in Stave 1 and Stave 5 of a Christmas Carol Charles Dickens wrote 'A Christmas Carol' during the Industrial Revolution the time of factories and machinery. Although this was the start of a new invention it brought about a negative outcome and consequently the population led to increasing work exponentially. As a result, the infrastructure of the cities (especially London) couldn't handle the population witch led to foul housing and immense poverty. Dickens' own childhood experience involved his father getting into debt and was also imprisoned in a debtor's prison, called Marshalsea. He even worked at the age of 12 to free his family from debt. Luckily the death of a relative eventually left enough money for his father to be free his father. So Dickens himself had to experience these laws as they played a big part in his life and may have even influenced him to write about on others who suffered like himself and his family when he was a child. The Christmas Carol had a big Social context. Back in Dickens time there were no welfare state pensions or benefits so the Christmas carol was about the concern of many of the social problems of Dickens time. Social problems were caused by the Industrial Revolution that large amounts of people had to move into cities for work as a result it led to the cities (especially London) ...read more.

He says "I don't make myself merry at Christmas and I can't afford to make idle people merry." -So Scrooge is calling all of the poor idle, regardless if it's their own fault or not or whether they can help themselves or not, so he shows no remorse to them Pathetic Fallacy is mention in Stave 1. "It was cold, bleak, biting weather: foggy withal". People would "go wheezing up and down, beating their hands upon their b*****s, and stamping their feet upon the pavement stones to warm them. The city clocks had only gone three but it was quite dark already-it had not been light all day." The fog came pouring in at every c***k and keyhole, and was so dense that although the court was the narrowest, the houses opposite were mere phantoms. To see the dingy cloud come drooping down, obscuring everything." What I understand from this paragraph is that the weather in Stave 1 was quite depressing and words like biting helps the readers to apprehend how menacingly bitter the weather was. Also people would stamp their feet upon the pavement stones to warm them. This tells me that cold had made the blood in their feet cold. The way the fog is described informs me of how thick it was and hard to see through. Also the clouds were 'dingy' this shows how the clouds were greyish and dull. Dickens wrote the Christmas Carol because when he was a boy his father was thrown in debtor's prison, and he wanted people to realize that it was important to help the poor, not stick them in prison. ...read more.

he repeats it again however this time adding "my fine fellow" this is a general act of kindness in his community but since when was scrooge part of his community? Definitely not in Stave 1 if ever and he even talks to the boy. His use of these rhetorical devices helps us to see the contrast in Scrooge's attitude towards life before the ghost's appear to him and after. Similes like "Light as a feather, I am as happy as an angel, I am as merry as a schoolboy, I am as giddy as a drunken man" are used to show this change in personality in a positive light. The way in which you can see his change in personality and understand properly, is that scrooge is like a butterfly in its cocoon in Stave 1 but in Stave 5 he has come out of his shell as he used to be "solitary as an oyster", but is now happy, merry and giddy instead of 'self-contained', serious and miserable. This effects the audience's perception of Scrooge. They now see Scrooge's changed ways, which was deep inside him. Dickens' wants the audience to see that they are good in everyone and everyone can change. In the conclusion I have given a summary about the Christmas carol I have gather information about the Social and historical context of the book. I have written about why Charles Dickens wrote this book I have also written about how this book raise the awareness of plight of the poor and how the book encourage people to give to the poor. ?? ?? ?? ?? Papa Rowe ...read more.