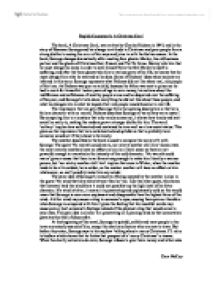 A Christmas Carol Coursework. Dickens describes Scrooge as as solitary as an oyster. By comparing him to a creature that only rarely comes out, it shows how lonely and anti-social he really is, making the readers grow a stronger dislike for him.

English Coursework: A Christmas Carol The book, A Christmas Carol, was written by Charles Dickens in 1843, and is the story of Ebenezer Scrooge and his change in attitude to Christmas and poor people from a strong dislike to seeing the error of his ways and joins in with the festive season. In the book, Scrooge changes dramatically after meeting four ghosts: Marley, his old business partner and the ghosts of Christmas Past, Present and Yet To Come. Marley tells him that he must change his ways in order to save himself from the fate Marley himself is suffering, and after the three ghosts take him to various parts of his life, he knows that he must change from who he was and so he does. Some of Dickens' ideas about society are inferred in this story. Scrooge represents what Dickens did not like about real, rich people of his time. As Dickens was poor as a child, because his father was sent to prison so he had to work for himself at twelve years of age to earn money, his notions about the indifference and selfishness of wealthy people arose and he despaired over the suffering of the poor, and Scrooge's traits show everything he did not like about these people, and what he changes into is what he hoped other rich people would become in real life. ...read more.

When the Ghost of Christmas Past takes him to his old workplace, where he was an apprentice, his old boss Fezziwig is compared with him and highlights his bad character. When Fezziwig says 'Yo ho my boys' and wishes 'him or her a merry Christmas', it shows the direct contrast to Scrooge as Fezziwig is so merry and enthusiastic about Christmas whereas Scrooge has a strong hatred for it. 'My boys' suggests that Fezziwig is quite close to d**k and Scrooge, which not only shows that Scrooge did have friends and good relations but also it emphasizes how lonely and anti-social he is now. In Stave II, Fezziwig says 'No more work tonight. Christmas Eve, d**k. Christmas, Ebenezer!' Not only does his strong excitement highlight the difference between him Scrooge, but what he says about closing up early is almost the complete opposite to what Scrooge had said before, when he never made any allowances except when he unwillingly gave his clerk the day off for Christmas: 'But I suppose you must have the whole day. Be here all the earlier in the morning.' Here Dickens gives us the impression of how mean and avaricious he really was, and by comparing him with Fezziwig, it really emphasizes this dislike for Christmas. At the present time, particularly at the Cratchit's house, a change in Scrooge is seen. At first the impression we are given is that, like before, characteristics between Scrooge and others are being contrasted together to highlight ...read more.

So, after analysing parts of the book, I think that Dickens was trying to give us the impression that Scrooge was a... but changes when he realises the true meaning of Christmas, that it's not about wealth but rather being with family and kindness, which was the message of the novel and what Dickens wanted to happen in real life. We see this change gradually progressing through the main structure of the book: the four ghosts each representing one of the four parts of Scrooge's accumulating change. After each part or ghost, Marley and the ghosts of Past, Present and Yet To Come, the change in Scrooge from cold and spiteful to loving and kind develops on itself further from before he had met that ghost, until the after last ghost and his transformation is complete. As there are a lot of contextual ideas from Dickens, I think there is an intended message that had derived from this novel. I think that Dickens wanted people, particularly the wealthy, to realise that they did have responsibilities to look out for not only themselves, but to think of those less fortunate than themselves. He believed that money was only a material want, and greed was not necessary. He wanted this novel to make people realise that mankind and family were better than wealth, especially at Christmas, and uses Scrooge's change in character to model this. ?? ?? ?? ?? Ciara McCoy ...read more.