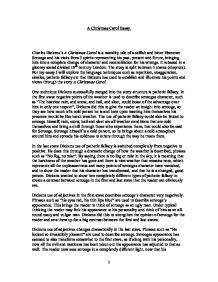 A Christmas Carol Essay. Charles Dickens's A Christmas Carol is a morality tale of a selfish and bitter Ebenezer Scrooge and his visits from 3 spirits representing his past, present and future, bringing him into a complete change of character and reconciliation for his wrongs. It is based in a gloomy social divided 19th century London. The story is split between 5 staves (chapters). For my essay I will explore the language techniques such as repetition, exaggeration, similes, pathetic fallacy etc that Dickens has used to establish and illustrate his points and views through the story A Christmas Carol. One technique Dickens successfully merged into the story structure is pathetic fallacy. In the first stave negative points of the weather is used to describe scrooges character, such as "The heaviest rain, and snow, and hail, and sleet, could boast of the advantage over him in only one respect", Dickens did this to give the reader an insight into scrooge, so they see how much of a cold person he is and how upon meeting him themselves his presence would be like harsh weather. The use of pathetic fallacy could also be linked to scrooge himself, rain, snow, hail and sleet are all weather conditions that are cold themselves and bring a chill through those who experience them, that could also be said for Scrooge. Scrooge himself is a cold person, so he brings about a cold atmosphere around him and spreads his coldness to others through the way he treats them. ...read more.

To say he's as happy as an angel links into how before he wasn't happy and his own atmosphere was depressing, but now he is happy and not just happy but as happy as an angelic creature. This shows the reader that scrooge is rejoicing in sight of his own change in character, and how they should feel happy to in response to that. Repetition is another key technique used to dramatically describe scrooge's character. A word repeated many times in the first few paragraphs is "dead" with this an instant negative mood is brought upon the reader. With it repeated so many times it keeps the text itself to a low mood, and with the other language techniques combined it makes the reader grasp the pessimistic atmosphere. The word "dead" itself could link to scrooge, as scrooge himself could be seen as dead on the inside, due to his complete lack of emotion shown to anything. Repetition is used in the same way in the last stave but in a different meaning, not to severely show the bad atmosphere but to highlight and create a positive atmosphere towards the overall affect on the reader. Here is a word repeated often in the last stave "chuckle". This is a cheerful and enthusiastic word that fits in with scrooge's new change of character. It makes the reader feel that scrooge is now a humorous person, which he never was before and therefore he has obviously changed. ...read more.

The Young Vic performance showed a modern twist of A Christmas carol. Scrooge was played by a woman in a South African setting, I believe having a woman play scrooge is to show that now that there is a near equality between men and women; women can become in a position like scrooge, have money to themselves and be selfish with it. The story explores Aid's, prostitution, poverty etc, this highlighted the contrast between old and modern society by exploring these issues from today's world, this is important because it demonstrates the moral of A Christmas carol in relevance to today. In conclusion I believe the moral behind Christmas carol is that in a social divided community it is important to treat everyone the same. This is shown through scrooge's character, and how he treats people somewhat below him in the social hierarchy as a man quite high in society and how he treats them after he has been visited by the spirits. I think that the moral is still of relevance to today's world, although there is a large time difference between now and then there still are social divides throughout society, weather it be financially or through the new celebrity status's there are or anything else, so it is still important to withhold the belief that everyone has the right to be treated the same, rich or poor, famous or not famous. Equality is something that should be of relevance though any time, weather it is a problem or something newly found, it is an issue and still will be until there is complete equality for all. ?? ?? ?? ?? 1 ...read more.