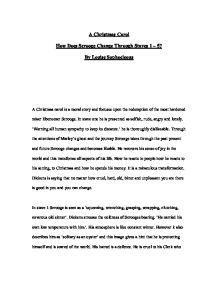 A Christmas Carol How Does Scrooge Change Through Staves 1 - 5?

A Christmas Carol How Does Scrooge Change Through Staves 1 - 5? By Louise Sophocleous A Christmas carol is a moral story and focuses upon the redemption of the most hardened miser Ebeneezer Scrooge. In stave one he is presented as selfish, rude, angry and lonely. 'Warning all human sympathy to keep its distance.' he is thoroughly dislikeable. Through the attentions of Marley's ghost and the journey Scrooge takes through the past present and future Scrooge changes and becomes likable. He recovers his sense of joy in the world and this transforms all aspects of his life. How he reacts to people how he reacts to his setting, to Christmas and how he spends his money. It is a miraculous transformation. Dickens is saying that no matter how cruel, hard, old, bitter and unpleasant you are there is good in you and you can change. In stave 1 Scrooge is seen as a 'squeezing, wrenching, grasping, scrapping, clutching, covetous old sinner'. Dickens stresses the coldness of Scrooges bearing. 'He carried his own low temperature with him'. His atmosphere is like constant winter. However it also describes him as 'solitary as an oyster' and this image gives a hint that he is protecting himself and is scared of the world. ...read more.

He must learn of the misery and fortune of other people. The ghost's job is to awaken Scrooge up and make him know himself and the world better. He must learn that he has 'misused' 'life's opportunities'. Though Marley was a cold man of business like Scrooge he had to accept a terrifying state and wishes to change Scrooge from a similar one in death Marley has realised that the business of life is to care about other people. Despite Scrooge's anxiety and fear that the spirits will terrify him and that the journey he will tread will be a trial, Scrooge actually seems pleased to return to his childhood, 'why was he rejoiced beyond all bounds to see them?' Then he sees himself as a child alone in the schoolroom on Christmas Eve and this sight saddens him. It is the contrast between himself and the happy children outside that makes him feel sad and Scrooge appears here to feel sad for himself. 'Scrooge sat down upon a form, and wept to see his poor forgotten self as he used to be'. Scrooge reveals that he was capable of feeling pain and suffering and did so as a child. This awakens his own conscience and he realises that the sympathy he lacked as a child he fails to give as an adult, 'there was a boy singing a Christmas Carol at my door last night. ...read more.

It is a lonely death and appals Scrooge. His acquaintances laugh and joke about the funeral. Scrooge is made to witness criminals enjoying the spoils after his death. He knows that the 'conduct of his future self would give him the clue he has missed - and would render the solultion of these riddles easy.' The clue is the horror of death, and that through his death he leaves misery and despair. Tiny Tim is also dying. It is as if Tiny Tim is some good and vulnerable part of himself that he must protect. Scrooge is shaken by this vision and says 'I shall not leave its lesson'. True to his word he wakes and is joyful to find himself still alive. He is thrilled that he is able to act out his good intentions. The first that he does is buy a huge turkey for the Cratchitt family and then he goes to see his nephew and share their Christmas dinner. From then on he becomes a second father to Tim and his life is changed for the better. The Christmas carol most important message is that it is never too late to change. There is good in everyone and it is through an awareness of one's own needs and those of others that we live a worthwhile life. Scrooge is shown contrasting visions, one of light and joy and the other of darkness and avarice. He finds his redemption by choosing the later path. ...read more.

This is an excellent analytical essay that makes some very successful interpretations about the character of Scrooge and how he is used as a vehicle to communicate Dickens' message to the reader. The quotes chosen are apt ones that could be analysed at a deeper, world level at times to show understanding of the writer's language choices and the impact they have. When looking at a whole text ensure that all areas are looked at; there is a larger focus on the early part of the novella which means some of the detail that is important during the visits of the ghosts of the present and yet to come is a little underdeveloped.