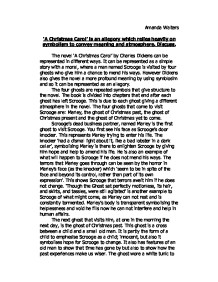 'A Christmas Carol' is an allegory which relies heavily on symbolism to convey meaning and atmosphere. Discuss.

Amanda Walters 'A Christmas Carol' is an allegory which relies heavily on symbolism to convey meaning and atmosphere. Discuss. The novel 'A Christmas Carol' by Charles Dickens can be represented in different ways. It can be represented as a simple story with a moral, where a man named Scrooge is visited by four ghosts who give him a chance to mend his ways. However Dickens also gives the novel a more profound meaning by using symblosim and so it can be represented as an allegory. The four ghosts are repeated symbols that give structure to the novel. The book is divided into chapters that end after each ghost has left Scrooge. This is due to each ghost giving a different atmosphere in the novel. The four ghosts that come to visit Scrooge are: Marley, the ghost of Christmas past, the ghost of Christmas present and the ghost of Christmas yet to come. Scrooge's dead business partner, named Marley is the first ghost to visit Scrooge. You first see his face as Scrooge's door knocker. This represents Marley trying to enter his life. The knocker 'had a dismal light about it, like a bad lobster in a dark cellar', symbolising Marley is there to enlighten Scrooge by giving him hope and help to amend his life. He is also an example of what will happen to Scrooge if he does not mend his ways. The terrors that Marley goes through can be seen by the horror in Marley's face (as the knocker) ...read more.

This ghost is almost the opposite of the last two ghosts; they symbolise in some way hope, this ghost shows a grim future ahead. All of it's body is hidden under a black garment, to represent the mystery of the future. 'It would have been difficult to... separate it from the darkness by which it was surrounded', also emphesises the darkness of the ghost, and the uncertainty of where you will end up in the future. All that is visble of the ghost is it's hand that points onward, symbolising how life goes on into the unknown. The ghost is silent, grave and slow, symbolic of death which is the only certainty in people's lifes. The other symbols found in the novel help emphesise points. Most of the topics emphesised are connected in their meanings. This helps build two main overall atmospheres through the novel which are mainly found on Christmas eve and Christmas morning. The novel begins on Christmas eve where there is a thick fog around the streets. The fog represents Scrooge's state of mind. He is lost and can not see very far forward which shows he is morally lost and can not see the right way ahead or see a life away from his work. It also symbolises how alone he is. When two gentlemen go by his work to ask for a donation for the poor, Scrooge refuses to give one and so 'the fog and darkness thickened', which shows Scrooge pushing himself further away from people and so becoming more lonely. ...read more.

Children also represent lack of experience, like Scrooge as a young man doing an apprentaship. 'A little girl... came darting in,... and often kissing him... and bending down to laugh' shows energy, innocence, happiness and love in Scrooge's younger sister. The boy that fetched the goose for Scrooge also symbolised energy and joy, as he 'was off like a shot'. Warmth symbolises compassion, christmas spirit and good cheer. You can see this when the ghost of Christmas present shows Scrooge his Nephew's house where there is a 'brisk fire' warming up a house full of cheer and laughter. In this novel Christmas itself is a symbol. It symbolises good cheer, hope, honesty, innocence, awareness, charity, caring, compassion, love and many more positive things. As Christmas brings out the best in people and we are more thoughtful of one another around that season. The lack of Christmas spirit in Scrooge and the way he believes Christmas to be a 'Humbug!' shows how he lacks all the positive things in his life. The change you see at the end of the novel where he is happy that Christmas has arrived shows he has changed to be a much more compassionate person. The symbolism in 'A Christmas Carol' by Charles Dickens emphesises the differences in atmosphere through the novel. It also explains how people are feelings. Some of the symbols structure the way the book is and so are necessary. 'A Christmas Carol' would not have the same effect without the hidden messages in it as it relies heavily on symbolism. ...read more.