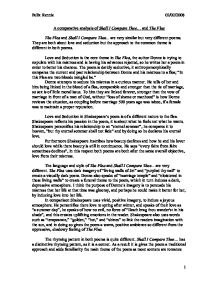 A comparative Analysis of Shall I Compare Thee

A comparative analysis of Shall I Compare Thee... and The Flea The Flea and Shall I Compare Thee... are very similar but very different poems. They are both about love and seduction but the approach to the common theme is different in both poems. Love and Seduction is the core theme in The Flea, the author Donne is trying to copulate with his mistress and is having his advances rejected, so he writes her a poem in order to better his chances. The poem is darkly seductive, it anthropomorphically compares the current and past relationship between Donne and his mistress to a flea; "In this Flea are two bloods mingled be." Donne attempts to seduce his mistress in a curious manner. He tells of her and him being linked in the blood of a flea, comparable and stronger than the tie of marriage, so s*x is of little moral issue. To him they are linked forever, stronger than the vow of marriage in front of a man of God, without "loss of shame or manhood" is how Donne reviews the situation, as coupling before marriage 500 years ago was taboo, if a female was to maintain a proper reputation. ...read more.

I think the purpose of Donne's imagery is to persuade his mistress that her life at that time was gloomy, and perhaps he could make it better for her, by inducing love into her life. In comparison Shakespeare uses vivid, positive imagery, to induce a joyous atmosphere. He personifies there love to spring after winter, and speaks of their love as "a summer day", he speaks of how no evil, no force of "Death brag thou wander'st in his shade", and this creates uplifiting emotions in the reader. Shakespeare also uses words such as "tempearate," "golden," "hot," and "shines" to link the readers imagination with the sun, and in doing so gives the poem a warm, positive ambience so different from the oppressive, shadowy feeling of The Flea. The rhyming pattern in both poems is quite different. Shall I Compare Thee... has a distinctive rhyming pattern, as it is a sonnet. As a result it is gives the poem a traditional approach and adds familiarity the main theme of the poem as most sonnets are romance poems. ...read more.

for the amusement of his peers, I think he is merely trying to look nonchalant, even though her rejection hurt him deeply. Love and seduction and their intermediate forms are both expressed in the two poems. Shakespeare's is more accessible, and it is easier to understand, from afar and under analysis. It is beautifully written and conveys the emotions to the reader, of that Shakespeare had wanted his lover to understand. Donne's poem however, is layered and deep. It conveys much information in a short space, show interaction within it, and time passing as the text continues. It requires more effort to understand but really opens up under examination. Both Poems are powered by the human drive to find a partner and are expressive of the poet's inner emotions around the mysterious forces of love and that of its subsidiary emotions. They are both at odds yet strangely similar, and that's what makes them so good to compare; they are linked to a core theme but are coming to a conclusion from two different perspectives and that's what makes them so useful when put together. ?? ?? ?? ?? Felix Rennie 02/02/2008 1 ...read more.