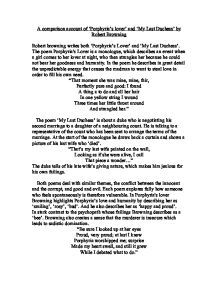 A comparison account of 'Porphyria's lover' and 'My Last Duchess' by Robert Browning.

A comparison account of 'Porphyria's lover' and 'My Last Duchess' by Robert Browning Robert browning writes both 'Porphyria's Lover' and 'My Last Duchess'. The poem Porphyria's Lover is a monologue, which describes an event when a girl comes to her lover at night, who then strangles her because he could not bear her goodness and humanity. In the poem he describes in great detail the unpredictable energy that causes the madman to want to steal love in order to fill his own need. "That moment she was mine, mine, fair, Perfectly pure and good: I found A thing a to do and all her hair In one yellow string I wound Three times her little throat around And strangled her." The poem 'My Last Duchess' is about a duke who is negotiating his second marriage to a daughter of a neighbouring count. ...read more.

Browning also creates a sense that the murderer is insecure which leads to s******c domination. "Be sure I looked up at her eyes Proud, very proud; at last I knew Porphyria worshipped me; surprise Made my heart swell, and still it grew While I debated what to do." My Last Duchess is also concerned with this theme. Browning reveals to the reader the process by which the Duke stifled his wife's will to live. Browning illustrates how his wife's spontaneity and innocence repels the Duke. "A heart ... how shall I say? ... Too soon made glad, Too easily impressed, she liked what'er She looked on, and her looks went everywhere. Sir, 'twas all one! My favour at her breast, The dropping of the daylight in the west, The bough of cherries some officious fool Broke in the orchard for her, the white mule She rode with round the terrace - all and each Would draw from her alike the approving speech, Or blush, at least." ...read more.

In each poem the final lines make it clear. In Porphyria's lover the ending highlights the condemnation, "And yet god has not said a word!" In My Last Duchess browning states that to the duke a human being must be possessed like a bronze statue. "Together down, sir! Notice Neptune, tho', Taming a sea-horse, though a rarity, Which Claus of Innsbruck cast in bronze for me." The social context of both poems differ, in Porphyria's lover the setting and characters are both of a lower social class, "And kneel'd and made the cheerless grate Blaze up, and all the cottage warm;" However in My last duchess the character and setting are both of upper social class, their titles 'duke' and 'duchess' shows this. But Browning still maintains the central theme In conclusion I believe that Browning has illustrated very effectively that society, as a whole has been corrupted by stronger, more insecure domination. However by domination they are destroying everything that is worthwhile. "And then all smiles stopped together" ...read more.