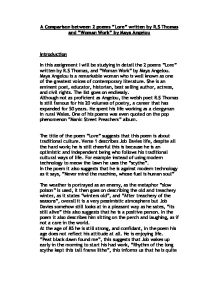 A Comparison between 2 poems "Lore" written by R.S Thomas and "Woman Work" by Maya Angelou Introduction In this assignment I will be studying in detail the 2 poems "Lore" written by R.S Thomas, and "Woman Work" by Maya Angelou. Maya Angelou is a remarkable woman who is well known as one of the greatest voices of contemporary literature. She is an eminent poet, educator, historian, best selling author, actress, and civil rights. The list goes on endlessly. Although not as proficient as Angelou, the welsh poet R.S Thomas is still famous for his 20 volumes of poetry, a career that has expanded for 50 years. He spent his life working as a clergyman in rural Wales. One of his poems was even quoted on the pop phenomenon "Manic Street Preachers" album. The title of the poem "Lore" suggests that this poem is about traditional culture. Verse 1 describes Job Davies life, despite all the hard work; he is still cheerful this is because he is an optimistic and independent being who follows his traditional cultural ways of life. For example instead of using modern technology to meow the lawn he uses the "scythe". ...read more.

"poison", "season", "off", and "laugh". Job Davies is an incredibly positive and independent man, he uses this powerful tool to conquer and survive his harsh life. The overall message the poem is trying to show is that, firstly we cannot depend on modern technology and we should respect more of the traditional culture. Secondly it shows that an 85 years old man is still alive, still healthy and most important of all still happy, although he is still using the olden methods. So it kind of proves a point to us that if he can do it anyone can. "Women Work" is one of Maya Angelou many masterpiece poetry. The outline of the poem is about a slave who wants more in life, other than working all the time; she wants to escape from this environment so much that later in the poem she starts to dream about freedom, how the element of nature would help her flee from this prison that she is in. Verse 1 begins with a list of jobs, this is mainly because the just of the poem is about "Work", and it also gives a sense of endless job that needs doing. ...read more.

She says that she owns them; this tells us that these are the only things that she possesses, because they are nature no one can take that away from her, that's why she calls it her own. The 2 poems in someway are similar, because the main outline of the poem is about hard work, but the big difference that separates the 2 poems is how they act towards the situations. For example Job Davies is a optimists he respects the traditional methods of doing things, instead of feeling sorry for himself, about the how hard the work is, or how tired he is. He carries on doing the job without complaining. If he was ever tired or miserable he will never show it. Overall he has a positive attitude towards life, whereas in the poem "woman work", all she can think of is escaping and running away from the environment that she is in. Away from the hard work, she then starts dreaming about how the element of nature might help her do that. In a way she is hallucinating, and thinking impossible things that will never happen, and this is a sign of weakness. Overall she is quite pessimistic, which is completely opposite to Job Davies, and that is the big difference that separates the 2 poems. ...read more.