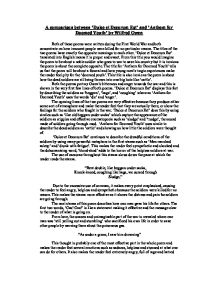 A comparison between 'Dulce et Decorum Est' and 'Anthem for Doomed Youth' by Wilfred Owen Both of these poems were written during the First World War and both concentrate on how innocent people were killed for no particular reason. The titles of the two poems have exactly the opposite meanings to each other. 'Dulce et Decorum Est' translated into English means it is proper and sweet. From this title you would imagine the poem to be about a noble soldier who goes to war to save his country but it is ironic as the poem is about the complete opposite. The title for 'Anthem for Doomed Youth' tells us that the poem will be about a funeral and how young men's tragic experiences make the reader feel pity for the 'doomed youth'. This title is also ironic as the poem is about how the dead soldiers are all being thrown into one big hole like 'cattle'. Both the poems portray Owen's bitterness and anger towards the war and this is shown in the very first few lines of both poems. 'Dulce et Decorum Est' displays this fact by describing the soldiers as 'beggars', 'hags', and 'coughing' where as 'Anthem for Doomed Youth' uses the words 'die' and 'anger'. ...read more.

'Anthem for Doomed Youth' also has the same effect as 'Dulce et Decorum Est' in the way both poems start. They both start off by describing the soldiers' conditions. 'Anthem for Doomed Youth' does this by using simile and personification, comparing the dead soldiers to 'cattle'. "What passing bells for those who die as cattle?" This gives the reader a disturbing thought because they are not getting proper burials but all of them being thrown in one large grave like 'cattle', causing them to feel sympathy for the soldiers and anger towards the war. Also the use of a rhetorical question at the beginning of the poem, asked by Owen to the reader, makes them think more about the poem. He goes on to answer them in meticulous detail in the rest of the poem, just to exemplify how dreadful the war actually was. This more subtly used technique does exactly the same job as in 'Dulce et Decorum Est', offering the reader to step into his, or any other soldier's shoes, just for a moment, in order to encounter the tragedy that he encountered. The next three lines of this poem continues to set the scene, using numerous adjectives such as 'monstrous', 'anger', 'stuttering' and 'rapid'. This description gives the reader a vivid picture and a genuine atmosphere of what it was like to fight in the war and describes the constant sound of rifles the soldiers had to tolerate. ...read more.

the use of real, physical objects such as 'rifles' and the heavily descriptive words used to describe the action in the poem. These create a real atmosphere in the poems whilst giving a dramatic account. Another reason why I feel 'Dulce et Decorum Est' is more effective than 'Anthem for Doomed Youth' is because the text mixed with the structure and rhyming scheme, makes the atmosphere seem authentic causing the reader to feel more emotions such as sympathy and empathy, making the poem more persuasive. This also gives the reader a vivid view of what being in the war was like and how soldiers were pointlessly dying. 'Anthem for Doomed Youth' does this well with the heavily used adjectives giving a vivid view and helping to set a scene, but no way as clearly as 'Dulce et Decorum Est' does. Also the fact that 'Dulce et Decorum Est' is in the narrative form allows the reader to visualise exactly what the conditions of the soldiers were like. In 'Anthem for Doomed Youth' Owen has deliberately distanced himself from the poem, giving a descriptive account, not a narrative, but more of an idealistic viewpoint. Both poems try to give the reader an insight to war, trying to convince at every chance given to prove war is hideous but 'Dulce et Decorum Est' doing this in a more effective way. ...read more.