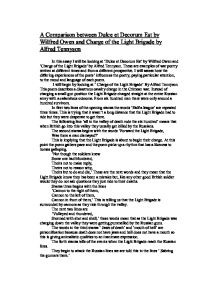 At this point the poem gathers pace and the poem picks up a rhythm that has a likeness to horses galloping. 'Not though the soldiers knew Some one had blundered, Theirs not to make reply, Theirs not to reason why, Theirs but to do and die,' These are the next words and they mean that the Light Brigade know they has been a mistake but, like any other good British soldier would they do not ask questions they just ride to their deaths. Stanza three begins with the lines 'Cannon to the right of them, Cannon to the left of them, Cannon in front of them,' This is telling us that the Light Brigade is surrounded by cannons as they ride through the valley. ...read more.

The retreat of the Light Brigade is described in the fifth stanza. It uses the same lines as in stanza three 'Cannon to the right of them, Cannon to the left of them.' The difference is in stanza three it says 'Cannon in front of them,' and in stanza five it says 'Cannon behind them,' This shows that the Light Brigade is riding the same route but in the other direction. Tennyson again puts across the point that some of the men in the light Brigade have been killed in this stanza with by using the words 'All that was left of them, Left of six hundred.' A memorial to the men of the Light Brigade is written in the fifth stanza. Tennyson uses words such as 'honour' 'noble' and 'glory' to put across the point of how heroic he thought they were ...read more.