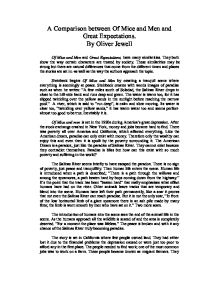 A Comparison between Of Mice and Men and Great Expectations.

A Comparison between Of Mice and Men and Great Expectations. By Oliver Jewell Of Mice and Men and Great Expectations, have many similarities. They both show the way certain characters are treated by society. These similarities may be strong but there are natural differences that come from the different times and places the stories are set in.-as well as the way the authors approach the topic. Steinbeck begins Of Mice and Men by creating a tranquil scene where everything is seemingly at peace. Steinbeck creates with words images of paradise such as when he writes: "A few miles south of Soledad, the Salinas River drops in close to the hill-side bank and runs deep and green. The water is warm too, for it has slipped twinkling over the yellow sands in the sunlight before reaching the narrow pool." A river, which is said to "run deep", is calm and slow moving. Its water is clear too, "twinkling over yellow sands," it has warm water too and seems perfect-almost too good to be true. Inevitably it is. Of Mice and men is set in the 1930s during America's great depression. After the stock exchange crashed in New York, money and jobs became hard to find. There was poverty all over America and California, which affected everything. ...read more.

The gibbet once held a pirate and pip sees the convict as if "He were the pirate come back to life, and come down, and going back to hook himself up again." Pip sees the man as being disconnected from life as if he were an undead being, not of this world. The story is set in first person and begins by focusing on the main character, Pip. It explains how Pips parents have died, along with five of his younger brothers. He never knew his parents and uses the inscriptions on their tombstones to get a picture of who they were. This gives a feeling of loneliness and as the scene opens Pip is alone with his thoughts of whom his parents were. Pip is alone. Very much like the two characters introduced at the end of the Of Mice and Men text. The characters in Of Mice and Men have each other Pip has no one. He is left alone and vulnerable in a secluded and spooky place as the evening draws in. Pip is not old enough to look after himself yet he admits: "I was at that time undersized for my years, and not strong." ...read more.

One of the first things the criminal says to him is, "Keep still, you little devil, or I'll cut your throat!" Despite all this violent commotion Pip still remains polite throughout the script. Pip is absolutely terrified of the convict yet he still addresses him as sir, "Pray don't do it, sir." It is almost as if Pip is a 19th century schoolboy addressing a violent teacher threatening him with the cane. Pip is very well spoken and polite which is a huge contrast to the convict. The convict speaks slang and informally and unsurprisingly isn't in the least bit polite. Dickens has made him this way to be more intimidating. Overall there are many similarities and contrasts between and in the scripts. Both are set in hard and depressing times where poverty effected almost everyone and if you were amongst the poor you were treated like dirt. But the authors have contrasting opinions on the nature of the settings. Dickens describes the nature of Victorian England as darkly as he does the death of Pips family. Steinbeck on the other hand describes the nature of Salinas River, a place that he describes as being nearly perfect. Steinbeck is more concerned with how humans and the poverty they bring with them are affecting Salinas River: the worn tree and the patch where a fire once burnt. ...read more.