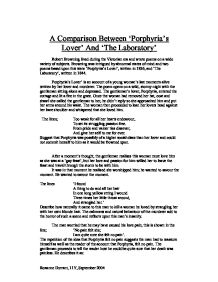 A Comparison Between 'Porphyria's Lover' And 'The Laboratory'

A Comparison Between 'Porphyria's Lover' And 'The Laboratory' Robert Browning lived during the Victorian era and wrote poems on a wide variety of subjects. Browning was intrigued by abnormal states of mind and two poems based upon this were 'Porphyria's Lover', written in 1836, and 'The Laboratory', written in 1844. Porphyria's Lover' is an account of a young woman's last moments alive written by her lover and murderer. The poem opens on a wild, stormy night with the gentleman sitting alone and depressed. The gentleman's lover, Porphyria, entered the cottage and lit a fire in the grate. Once the woman had removed her hat, coat and shawl she called the gentleman to her, he didn't reply so she approached him and put her arms around his waist. The woman then proceeded to lean her lovers head against her bare shoulder and whispered that she loved him. The lines; Too weak for all her hearts endeavour, To set its struggling passion free. From pride and vainer ties dissever, And give her self to me for ever. Suggest that Porphyria was possibly of a higher social class than her lover and could not commit herself to him as it would be frowned upon. After a moment's thought, the gentleman realises this woman must love him as she was at a 'gay feast', but her love and passion for him willed her to leave the feast and travel through the storm to be with him. ...read more.

Robert Browning's other poem; 'The Laboratory' is also about a psychotic murderer. The poem opens with the verse: Now that I, tying they glass mask tightly, May gave through these faint smokes curling whitely, As thou pliest thy trade in this devil's smithy - Which is the poison to poison her prithee? From the mention of poisoning a female we know that a murder is being planned. The reader is able to imagine the scene as the culprit ties the fume mask around her face and gazes around the laboratory at all the concoctions. The thought of curling white smoke suggests that Arsenic is being prepared. The second verse indicates the motive for the murder. The culprit is female and wishes her lover's mistress dead for the betrayal. The woman imagines her lover to be laughing at her misfortune while he believes her to be at church crying for her loss, he is oblivious to her whereabouts as demonstrated in the lines; They believe my tears flow While they laugh, laugh at me, at me fled to the drear Empty church, to pray God in, for them - I am here. The next verse of the poem uses alliteration and rhyme when describing the making of the poison. This sets a sort of rhythm to the poem and may make it more appealing to the reader. 'Grind away, moisten and mash up thy pasts, Pound at thy prouder - I am not in haste.' ...read more.

The use of metaphors allows the reader to compare the situation or object in question to another thus allowing the reader to visualise more clearly. The similarity between the two poems is that they are both written in the first person i.e. the psychopath, and are originated from loving relationships. The differences in the poems are that one is motivated by a love and a fear of loss and the other from love, loss and jealous hatred. A noticeable difference in poems is the tenses. 'Porphyria's Lover' was written in the past tense as an account of the murder which had taken place. 'The Laboratory' was written in the present and future tense as a plan of how a murder is to take place. The style and format is another difference between the two poems. Of the two poems, I preferred 'Porphyria's Lover' because it was written as an account with an ending,where-as 'The Laboratory' was written without concluding whether the murder was carried out. Another reason for me preferring this poem was that it captured the true mind of a psychotic murderer; the gentleman did not understand how awful his actions were and believed his actions had been justified as God had not objected. I found it horrific that someone could be so determined that they had done no wrong that they would let their faith and God distinguish whether they had done rite or wrong as opposed to their own conscience. ?? ?? ?? ?? Roxanne Durrant, 11Y, September 2004 ...read more.