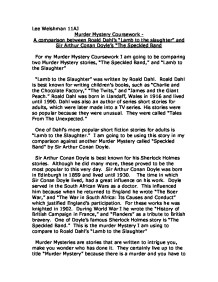 A comparison between Roald Dahl's

In the end she gets away with it, and disposes of the murder weapon by literally feeding it to the police. The narrative structure for a murder mystery is usually this:- > A body is found by some one. > An inspector comes and there is an investigation > Clues are found > The Inspector solves the case > The reader is told all We are usually told in the 3rd person narrative. We are watching the murder, but do not always see everything. This is true in "The Speckled Band," but not in "Lamb to the Slaughter" because we see things in the 1st person narrative, through the eyes of Mary Maloney. In "The Speckled Band" I think that it is set pre 1914 because of the way of the way the people talk in it. They in a manner which is not typical of our time. They also have things that are not as common in society now a days, such as a "bell rope" and they have a housekeeper's room, which many people don't have any more. Whereas in "Lamb to the Slaughter" we can tell that it is set post 1914, because of the way they talk, which a lot less formal than in "The Speckled Band" and how cars are a lot more common. ...read more.

She uses a large blunt object to kill him, although it is a leg of frozen lamb. She then disposes of the weapon, by feeding it to the policemen, and pretends that she knows nothing about it. I think it has a typical motive, revenge for what he has done. But the murder weapon is typical because it is a large blunt object, but is a leg of lamb. I think that in both cases, the stories were written for entertainment value. That were to make people wonder what had happened, think about why, who, how. Also to make you think that everything is not always what it seems. I personally enjoyed "Lamb to the Slaughter" more, because it isn't what you expect. The way that Mary Maloney disposes of the weapon by feeding it to the policemen, and then having a little giggle about it. It defies most of the common rules of a murder mystery, which is why I prefer it. You don't have to figure out why they did it, although you want to know what Mr. Maloney told her to drive her to do it. I think that both the stories were not that typical, mainly because of the murder weapon used, but I would have to say that "The Speckled Band" is the more typical of the too, because apart from the murder weapon, it follows the typical rules for a murder mystery. ...read more.