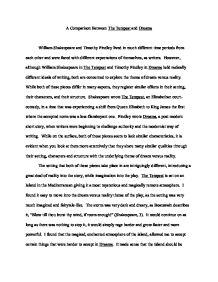 A Comparison Between The Tempest and Dreams.

A Comparison Between The Tempest and Dreams William Shakespeare and Timothy Findley lived in much different time periods from each other and were faced with different expectations of themselves, as writers. However, although William Shakespeare in The Tempest and Timothy Findley in Dreams held radically different ideals of writing, both are concerned to explore the theme of dream versus reality. While both of these pieces differ in many aspects, they register similar effects in their setting, their characters, and their structure. Shakespeare wrote The Tempest, an Elizabethan court-comedy, in a time that was experiencing a shift from Queen Elizabeth to King James the first where the accepted norm was a less-flamboyant one. Findley wrote Dreams, a post-modern short story, when writers were beginning to challenge authority and the modernist way of writing. While on the surface, both of these pieces seem to lack similar characteristics, it is evident when you look at them more attentively that they share many similar qualities through their setting, characters and structure with the underlying theme of dream versus reality. The setting that both of these pieces take place in are intriguingly different, introducing a great deal of reality into the story, while imagination into the play. ...read more.

It is crucial to realize however, that imagination is not restricted solely to the conclusions of both The Tempest and Dreams. Imagination is required throughout each piece, involving myself from the beginning, to end. Although imagination is necessary in both, each requires it for different purposes. In order to fully grasp The Tempest, it was necessary for me to imagine the setting more then I was required to in Dreams which described it in elaborate terms. Also, I found that Dreams made me question certain beliefs that I held, where as I accepted more of the standards in The Tempest. For example, in Dreams, Everett proposes a rather intriguing question that triggered my imagination for possible explanations. "'The only place that Kenneth Albright goes, I tell you, is in dreams,' Everett said. 'That is the only place beyond the ward into which the patient can or does escape.'" (Findley, 99). A series of questions arose in myself, immediately following this idea, such as is this really possible? Can one enter into another's dreams? My imagination was required to fully come to terms with these questions, in which I understood that it was possible for Everett to experience Kenneth, but that Kenneth could not experience Everett in the dream. ...read more.

understand it as a real place, while an island on the Mediterranean seems far and distant to me, a perfect setting for a fictional story. While reading Dreams however, I found myself believing that Mimi and Everett were actual people, seeing as how the setting was so real. Dreams as well, had an especially strong impact on me due to my personal experiences as a child. While living in my previous house when I was around age five or six, I would have a reoccurring nightmare. Every night I could count on the same dream in which I was being chased down a school hallway. As soon as Everett refused to sleep because of a reoccurring dream, I understood exactly what he was feeling and it gave me the shivers as I remembered a similar dread of going to sleep. This, along with the fact that I kept believing Dreams was partly non-fictional, made the short story seem more chilling then The Tempest. While there are obvious differences, in both Dreams and The Tempest, many similarities can also be found. Through the use of setting, characters and structure the theme of dream versus reality is conveyed in an apparent and attractive way. ...read more.