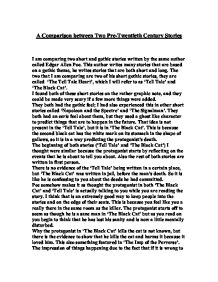 A Comparison between Two Pre-Twentieth Century Stories I am comparing two short and gothic stories written by the same author called Edgar Allen Poe. This author writes many stories that are based on a gothic theme, he writes stories that are both short and long. The two that I am comparing are two of his short gothic stories, they are called 'The Tell Tale Heart', which I will refer to as 'Tell Tale' and 'The Black Cat'. I found both of these short stories on the rather graphic note, and they could be made very scary if a few more things were added. They both had the gothic feel; I had also experienced this in other short stories called 'Napoleon and the Spectre' and 'The Signalman'. They both had an eerie feel about them, but they used a ghost like character to predict things that are to happen in the future. That idea is not present in the 'Tell Tale', but it is in 'The Black Cat'. ...read more.

There is a mischievous feel to that idea, and you could say that we have all done a bad thing just because it was bad to do it. There is the feeling that the protagonist is trying to make out to the reader that he is sane and in the 'Tell Tale' he actually thinks to himself that he superior to average human being. He has this impression that he has a disease that has opened his senses instead of destroying them, they gave him acute hearing and thought. The protagonist then tells you about the strong relationship that he has between his victim, whether it was a cat, a wife or an old man. Somehow he loses this love and ends up killing his companion. There is a conclusion to the killings though, you could say he killed them because they loved him and cared for him, back to 'The Imp of the Preverse'. There was comfort and love and for this reason he just killed them. ...read more.

In 'The Black Cat' you have no evidence at all in the beginning that there will be a murder somewhere in the story. In this story there is a point where it all starts to change, the cat has had its eyes gouged out and you start to learn that the protagonist has a slight insane way about him. Another particularly noticeable difference in the build up of tension in the 'Tell Tale' which is different to 'The Black Cat' is that Poe uses repetition throughout the story of the planning of the murder. In 'The Black Cat' the protagonist tells you more about his past and what is in his mind; he has a more morel voice. He also uses a more sophisticated language, which gives the impression that he is a more educated man. Overall I think that Edgar Allen Poe is a talented author due to his ability to keep the reader interested and he can write such short stories, but they can get you thinking about them for a long time. ...read more.